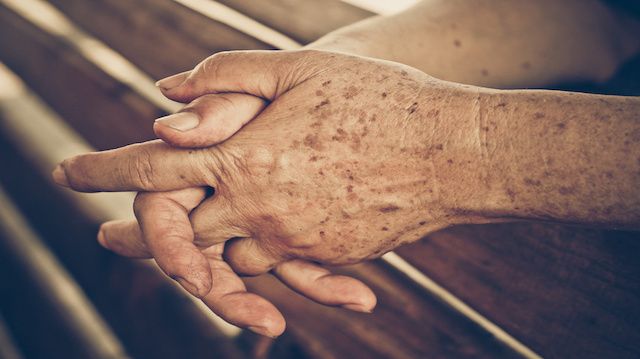 Have you noticed any spots of darker color on your face, hands or chest? Those brown spots that form on the skin as we get older are one of the more embarrassing and unattractive signs of aging.

They are considered benign, or not harmful to health, but cosmetically are often considered unsightly, and may contribute to an overall older appearance.

It’s important to differentiate between flat, darkened patches of skin that look like large freckles, versus irregular dark spots that change texture, color or size over time. Any of the latter should be checked by a health-care professional to ensure they are not dangerous.

While liver spots are associated with aging, this is not the only cause. Darker patches of skin usually form due to excessive sun exposure, which encourages the formation of a pigment called melanin. Age spots can also form due to nutritional deficiencies such as potassium and selenium.

Could it be possible to discourage them from forming, or even reverse them? Here are some natural remedies, including herbs and foods to consume, and also topical treatments for age spots.

Western medical practitioners usually recommend treatments such as liquid nitrogen cryosurgery, where the skin is frozen with a chemical, or laser treatment where the skin pigments are blasted away via beams of light energy. There are also topical bleaching agents which seep through the skin to remove color from the darkened pigments.

Another treatment is called hydroquinone, which actually blocks the skin’s ability to create melanin. This can be harmful in the long term.

While topically applied remedies can help to remove the spots, an internal approach may be more effective. Some say that dark spots may occur due to the liver being overwhelmed and unable to clear toxins. These then show up in the skin. Consuming foods that support liver health, such as lemon juice and dandelion greens, along with avoiding toxins like alcohol and medications, could encourage detoxification of the liver and help to clear the spots over time. 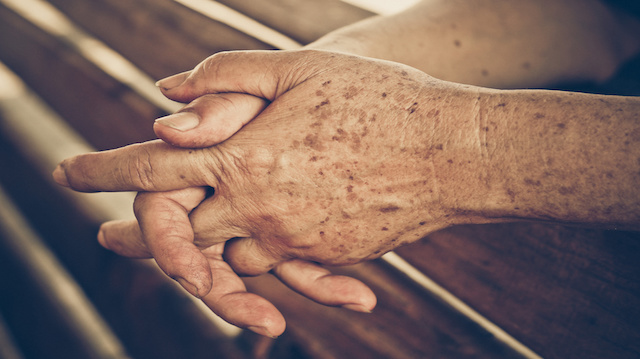 There are also dietary and supplementation strategies which can be effective. Pine bark extract, with the active constituent pycnogenol, was shown by a 2012 study to significantly improve the appearance of pigmentation and age spots from mild to moderate photoaging. The extract was consumed in 100 mg or 40 mg amounts for a period of 12 weeks. Then the participants’ skin was photographed again after six months. Both doses showed significant improvement in the spotted appearance of the participants’ skin.

Adding aloe vera gel to your diet can also improve the texture and elasticity of photoaged skin. This can be purchased from your local health-food store and consumed orally in a dose of 1200 to 3600 mg per day. The taste is fairly pleasant, so you can take it straight or add it to smoothies.

Anti-inflammatory and cleansing spices such as turmeric, cayenne pepper and cinnamon can also be great for skin health, as can sea salt treatments.

Finally, and unsurprisingly, quitting smoking has been found to be one of the best ways to improve the appearance of aged skin. A 2010 Italian study found that the participants looked an average of 13 years younger (based on digital analysis of photographs with a number of parameters) just nine months after dropping the habit.

Improving your appearance can be an important way to show yourself love and increase your self-confidence, which can have boundless positive effects on the rest of your life. Why not try some of these gentle, natural methods to defeat age spots!