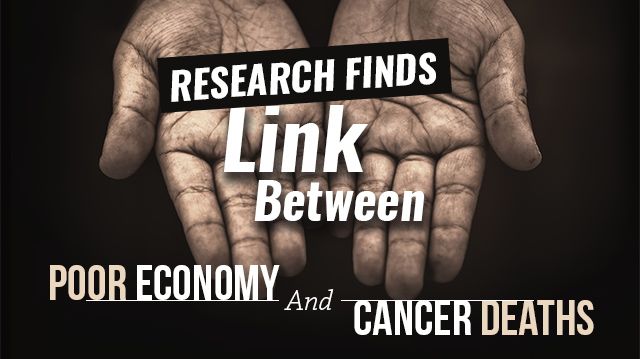 When the economy takes a downward turn, many things become difficult for many people. There are less jobs to go around, people are laid off from long-held positions, and many families have to scrimp and save to make ends meet. These are just a few of the many effects an economic crisis can have.

Along with financial matters, it has been found that many suffer worsened health during these times. A poor economy has been linked to both heart disease and higher suicide rates. Both of these things can likely be attributed, at least in part, to stress, depression, and feelings of hopelessness. We all know stress can be a killer.

What hasn’t been studied until now, however, is the effect of a poor economy on cancer deaths. A new study, recently published in The Lancet, found that economic recession is linked to higher rates of death from cancer, specifically cancers that are classified as treatable.

On the purpose of their research, the study authors wrote:

“The global economic crisis has been associated with increased unemployment and reduced public-sector expenditure on health care (PEH). We estimated the effects of changes in unemployment and PEH on cancer mortality, and identified how universal health coverage (UHC) affected these relationships.”

Upon analyzing data from approximately two billion people across over 70 middle and high-income nations from 1990 until 2010, the researchers found that the worldwide economic downturn of 2008 to 2010 was linked to 260,000 “excess cancer-related deaths.” Many of these deaths were from cancers that were considered treatable.

“Treatable” cancers were those with survival rates of 50 percent or higher. These included colon cancer, breast cancer, and prostate cancer.

“The country might find the promise of improving treatments difficult to achieve without first providing coverage to those affected by cancer. Universal health coverage, specifically for all patients with cancer, would meet the Institute of Medicine recommendation to reduce disparities in access to cancer care for vulnerable and underserved populations.”

“Higher unemployment due to economic crisis and austerity measures is associated with higher number of cancer deaths. Universal health coverage protects against these deaths. That there are needless deaths is a major societal concern.”

This is indeed a major societal concern. Healthcare policy makers should take a long, hard look at this study when deciding the course our nation’s healthcare should take.

It doesn’t make sense that people suffering from cancer should lose their lives simply because they cannot afford to go to a doctor. With the proper treatment, these are cancers that patients could likely survive. Turning a blind eye to them is downright unacceptable. We, as a nation, should be much more compassionate.