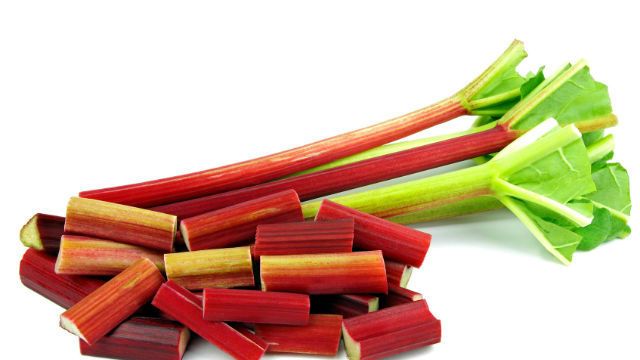 Often known for their bright red color and tangy, tart taste, the stalks of the rhubarb plant have been cultivated for centuries, and are used today for both their numerous health benefits and as an addition to several baked goods, most notably that of the summertime staple, strawberry rhubarb pie.

The ancient Chinese civilizations first began using rhubarb medicinally as far back as 2700 BC. For centuries, these bright red stalks were used primarily as a treatment for digestive disorders including indigestion and constipation (large doses tend to have a mild laxative effect).

The plant itself is easy to grow and often lives upwards of ten years. Unlike most vegetables, the dark green heart-shaped leaves are discarded, as they are not fit for human consumption. The celery-like stalks, however, can be harvested after about two years of growth and offer a wealth of nutritional benefits. In the US, the most popularly grown varieties include Canada red, cherry red, ruby and valentine, names all paying tribute to their unique hue.

From a nutritional standpoint, rhubarb stalks are high in several B complex vitamins, including folate, riboflavin, niacin, B-6, thiamin and pantothenic acid, all of which play key roles in several metabolic processes.

While an excellent source of immune-boosting vitamin C, the rhubarb stalks are extremely high in vitamin A and several important polyphenolic flavonoids including beta carotene, zeaxanthin and lutein. These compounds are converted to vitamin A once inside the body, and are key contributors to eye and skin health. They also act as antioxidants to rid the body of various toxins.

Just about one cup of these slender stalks provides up to 24 percent of the recommended daily value of vitamin K, which promotes bone health by triggering bone-building cell production. Vitamin K has also been shown to aid in the treatment of Alzheimer’s disease, as it protects the brain from neuronal damage. Research indicates that rhubarb contains several anti-cancer properties that have been proven to inhibit cancer-cell proliferation and metastization, and induce cancer cell death.

Rhubarb’s uniquely bitter taste is often best paired with naturally sweet foods such as berries or other fruits. Redder stalks tend to be sweeter than their pinker or even greener counterparts, and can be incorporated into a number of summertime sweets.

Puree stewed rhubarb until completely smooth. Add in the yogurt, sugar and juice. Freeze the mixture in an ice cream maker, or cover and freeze in a shallow pan until almost firm (about 3-4 hours). Break up the almost firm mixture and process through the food processor until smooth. Freeze again in airtight containers for at least an hour. Serve with sliced berries on top.

Mix the oil, maple syrup and stevia together and gently whisk in the eggs and yogurt. In a large mixing bowl combine the dry ingredients. Begin to slowly stir in the yogurt mixture until blended. Spoon the mixture into muffin tins and sprinkle with additional cinnamon if desired and bake at 350 F for 15-20 minutes. Cool on wire rack and serve alongside fresh berries.