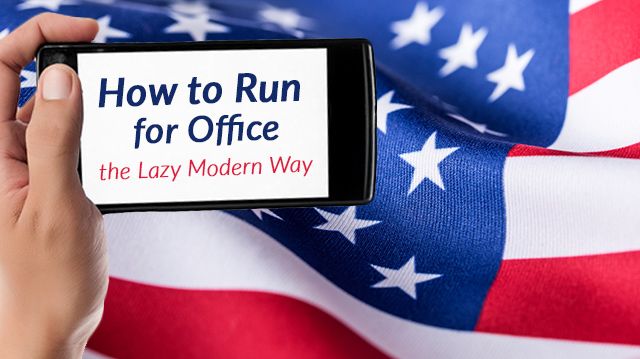 Today presidential hopefuls have private jets, free media opportunities online and access to social media technologies. Before all these tools, campaigns were quite different. Long travel slogs, slow communications, you name it. They had it tough!

Here are the differences between then and now:

While campaigning from home might sound like a lazy campaign strategy, take into account that James Garfield literally campaigned from his front porch. He would train people in to see him. His wife would serve beverages while he spoke to the people gathered on his lawn. Today our politicians are so far from the people that even questions asked at huge speaking rallies are staged. Campaigns are a far cry from home-based, personalized hospitality of the past.

Cross-country campaigns were also tackled with greater gusto in the olden days. Not only did politicians travel via railroad, they targeted more towns and spoke to smaller groups of people. William Jennings Bryan would stop at up to 20 towns each day to speak from the train platform, known as a whistle-stop tour since these were small stations where the station would sound whistle if a passenger was waiting. The term “stump speech” is derived from past campaigns where presidential candidates would literally speak from atop the stumps of felled trees in rural America.

Today, almost no politician bothers to speak at smaller towns. Their strategic planners demand the most bang for their buck. They fly in and out of the places identified as most useful to their campaigns and give large, televised speeches instead.

Then: Penny postcards, posters and jingles

Getting the campaign message out to the people before modern technology was a tricky proposition. There was no sure-fire path to success and many avenues were used. Posters were printed and hung. Penny postcards were mailed en masse. Campaign jingles were devised and sung. In short, grassroots advertising reigned supreme. There were no shortcuts.

While many of these tools still exist today, they are much less prominent. The campaign center stage has been replaced with more modern alternatives. One is particularly cost effective: YouTube. One free video shared many times can reach a surprising percentage of the population. Who didn’t watch Obama’s “Yes We Can” video?

Slander as a Campaign Strategy

Then: Literary insults that verged on mean poetry

Now: Schoolyard taunts with a limited grasp of the English language

Politico Magazine called the 2016 electoral campaign “the dirtiest presidential race since ‘72.” Harsh insults such as “jerk” and “biggest liar” have been thrown around. Clinton compared the Republican candidates to terrorists and Trump called O’Malley a “disgusting, weak, pathetic little baby.”

While ad hominem attacks are certainly not a good thing, the presidential hopefuls of America’s past put much more effort into defaming their competition. Though cultural etiquette required them to veil their smear campaigns, insult made on their behalf read like fine, if corrosive, literature.

A Jeffersonian paper referred to John Adams as a “blind, bald, crippled, toothless man” who “is a hideous hermaphroditical character with neither the force and firmness of a man, nor the gentleness and sensibility of a woman.” The Adams’ camp responded that Jefferson was a “mean spirited, low-lived fellow, the son of a half-breed Indian squaw, sired by a Virginia mulatto father.”

Adams also had a well thought out vision of how the country might look under a Jefferson presidency: “If Thomas Jefferson wins, robbery, rape and incest will be openly taught and practiced. The air will be wrent with the cries of the distressed, the soil will be soaked with blood and the air black with crimes. Are you prepared to see your dwellings in flames, female’s chastity violated, children writhing on a pike?”

How’s that for slander? “Jerk” doesn’t sound so bad now, does it?

Then: Funding from the rich and “loyal”

Now: Corporate donations, with a touch of money-bomb magic

Campaign financing is one area in which modern technology has arguably made our presidential campaign system more fair and democratic. Before the rise of corporate finances, presidential hopefuls relied upon money from the rich, loyal and few. Wealthy families would fund campaigns and politicians were just as beholden to them as many are to corporations today. In addition, loyal civil servants were assigned cushy jobs for their party loyalty. They were then expected to donate a portion of their salaries to the party.

Today’s campaign financing is hardly a wonderland of democratic bliss. As has been highlighted in 2016, establishment candidates are frequently backed by corporate interests. This backing isn’t free. While the presidents of old handed out jobs and wealth-friendly policy like candy, today many establishment politicians instead support corporate-friendly policies.

However, modern technology has shown Americans a light at the end of the tunnel. In 2007, presidential candidate Ron Paul raised $6 million in 24 hours. Instead of relying on large contribution from a small number of wealthy donors, the campaign succeeded by collecting small donations from many people. Online marketing and social media were the key to this success. Since then Barack Obama and Bernie Sanders have also successfully used social media to stand out despite being virtually unknown candidates.