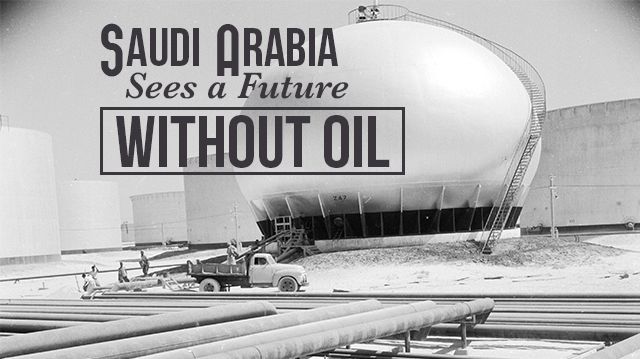 Saudi Arabia is a country of shocking excess. The ruling Al Saud family is known to use the country’s treasury as an extension of its own personal wealth. The many princes and princesses of Saudi each get paid a monthly salary. The amounts are staggering.

The question is: What happens to a kingdom built on oil when the planet finally gets off petroleum for good?

Based on cables procured by WikiLeaks dating back to 1996, a surviving son of Abdul-Aziz Ibn Saud receives between $200,000 and $270,000 a month. Grandchildren and great grandchildren are given $27,000 and $13,000 a month respectively. Even the most distant relative can expect $800 a month. Payments begin at birth, making procreation a mighty financial boost. This is on top of generous bonus schemes and the family’s tendency to raid the treasury in various ways.

The Al Sauds are also quite generous with the people as well. The standard of living in Saudi Arabia is one of the highest in the world. The country has invested heavily in infrastructure and social services. Cheap energy has become a near birthright. Health care and education is free.

Labor force participation is only 36.4 percent, with about 90 percent of working Saudis employed by the public sector. The bloated public sector often results in fat paychecks for little actual work, while an army of expats are employed to support the economy’s private sector.

Oil has made unreal decadence a very real possibility in Saudi Arabia. In times of high oil prices, the country is able to spend lavishly while still saving money. Unfortunately for the Al Saud family, the fat time appears to ending.

As oil prices plummet and alternative energy sources become more realistic, the Saudi story will have to change. No one knows this better than Deputy Crown Prince Mohammad bin Salman Al Saud.

The 30-year-old prince has been referred to as the power behind aging King Salman’s throne. He is the youngest Foreign Minister in the world. He is also chairman for the Council of Economic and Development Affairs, Chief of the Royal Court and Second Deputy Prime Minister. Armed with a bachelor’s degree in law from King Saud University and an entourage of highly educated advisers, the young prince is keen to shake up Saudi Arabia’s economy.

His approach is admirable: Diversify while limiting the country’s lavish spending habits.

Saudi Aramco is the largest oil and gas company in the world. It is also the world’s most valuable company, with an estimated worth of between $1.25 trillion and $10 trillion. The company is owned and operated by Saudi Arabia. The Al Saud family can basically do as it pleases, from allotting profits to personal projects to manipulating the price of oil on a personal whim. There are no investors to answer to and not even a mirage of transparency to maintain.

That power may soon be lost. Prince Mohammad is planning to transfer Aramco equity to Saudi Arabia’s Public Investment Fund (PIF) in order to wean Saudi Arabia from its oil dependency. With the addition of Aramco, the Saudi sovereign wealth fund will become the world’s largest such fund. The prince then plans to sell shares in the company and begin reinvesting the money. Though he will sell under 5 percent to begin with, these initial sales could take place as soon as next year.

The fund already is beginning to diversify its investments internationally. The PIF purchased a 38% stake in South Korea Posco Engineering & Construction Co. and invested $10 billion in Russia this year. Foreign investments currently make up about 5 percent of the fund now. This is set to expand to 50 percent by 2020.

Prince Mohammad told the Economist that Saudi finances were not the only reason to open Aramco to public investment: “It is in the interest of Aramco, and it is for the interest of more transparency, and to counter corruption, if any, that may be circling around Aramco.”

The prince thus appears to welcome an end to those very features that allow the royal family such absolute control of the company and its bottomless pools of cash.

He is not the first royal to attempt to rein in abuse of power. King Abdullah began to dismantle the more ridiculous of his family’s budgetary indiscretions in 2005. A princess was reportedly told that only two of her 12 friends could jump on an international flight for free. Hotel suites permanently paid for and kept available for royalty use were canceled. Schemes whereby princes would issue visas for a monthly kickback were identified and shut down.

Crown Prince Salman always supported the former king in these cuts. Though our access to confidential documents ends before Salman became king himself, it is safe to assume that he has continued these efforts.

The Al Saud family are not the only Saudis making adjustments. Though income taxes are not being considered, the country is initiating a VAT on non-essential, luxury items. Cuts to long-standing subsidies in the water, electricity and fuel industries have been implemented. There is talk of privatizing social programs and firing civil servants.

These changes may be necessary, but they could not have come at a worse time. The delicate balance between the Al Saud family and their people is built on a social contract. The people are used to giving up political freedom and turning a blind eye to elite transgressions in return for a high standard of living. If that standard falls, the unquestioned supremacy of the Al Saud family may fall with it.

Perhaps more concerning, young people are a booming demographic in Saudi Arabia. Over half the population is under 25 years old. There aren’t really any jobs for them, much less under Prince Mohammad’s plan to cut public sector spending. The country is well aware of the situation and plans to encourage the private sector to employ more Saudis. Still, the stakes are high.

As a country that studies and identifies with the very same texts as jihadists in the region, a broken social contract could put large numbers of unemployed, disenfranchised Saudi youth at risk of radicalization. Only time will tell.