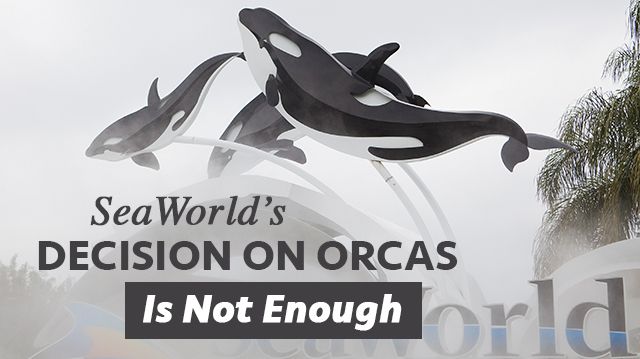 This month, the SeaWorld amusement park company announced that it would end its orca artificial insemination program. As the company has not captured wild killer whales in nearly 40 years, we can expect the number of orcas living in captivity to fall with each captive orca’s death.

Most will not die of old age. Male orcas can live to 60 years old in the wild, with females living up to 100 years. Their average life spans are 30 and 50 years respectively. Orcas survive a median of 12 years, however, in captivity.

In addition to lifespan issues, orcas in captivity are undeniably unhappy. In the wild they swim up to 100 miles a day and dive to depths of nearly 200 feet. In captivity, they are known to lie listlessly in their small pens or destroy their teeth on the materials surrounding them. The dorsal fin of captured males collapses. In the wild this occurs in only one percent of whales and is a sign of severe trauma.

After years of protest and following the highly influential orca documentary Blackfish, SeaWorld’s promise to end the orca captivity program is a step in the right direction, but it isn’t enough. Leaving the roughly two dozen SeaWorld killer whales — one of which is pregnant — in captivity is unacceptable.

What can be done for orcas currently in captivity?

The final scene of the kids’ movie Free Willy comes immediately to mind. Our beloved orca friend jumps over his prison net in order to roam free in the ocean. In the movie he presumably lives a long and happy life. The real Willy, Keiko, did not do quite as well as his fictional counterpart, but he did fare better than most whales living in captivity.

Roughly $500,000 was spent preparing Keiko for life in the wild. Upon his release, he was able to find food and fend for himself. Sadly, he was never integrated into an ocean family. He seemed to crave human companionship after his many years in captivity and stayed close to the coast for most of his life. He was free, but hardly wild. Keiko died of pneumonia several years after his release. He was twenty-seven years old. Though this is young for a male orca, it is significantly older than most orcas who die in captivity.

Keiko’s release has been deemed both a stunning success and an expensive failure. There is some disagreement, too, as to how long Keiko actually survived in the wild. He began taking “ocean treks” where he would follow a research boat in the open ocean as early as 1998. He was technically released on his own in 2002, when he began a successful five-week solo journey before searching out human companionship in Norway. Aside from that five-week period, his human caretakers and trainers were never far from him. He died in 2003.

Some activists point to the story of Springer the orca as evidence that killer whales can be successfully rehabilitated and released into the ocean. Springer was found abandoned at two years old. She was rehabilitated for a month in a sea pen. Her pod was identified and she was ferried to join them. She had been missing for six months and was immediately welcomed home. Though a lovely story, it is hardly applicable to a whale born in captivity.

Keiko’s story, even if it isn’t the perfect vision of wildlife rehabilitation, is much more promising as a glimmer of how captive orcas might live happy, fulfilled lives. A domesticated whale living in the open ocean is certainly a step up from being a captive whale. Why should it matter if they choose to stay near the coast and interact with humans on a regular basis? Moreover, a group of previously captive whales have a chance at creating their own pod. Keiko was all alone. The only way to know for sure what large-scale orca rehabilitation and release might look like is to try it out. It can’t be worse than their lives in captivity.

Though no one seems to be discussing an open release policy, interest in a sea pen that could provide an ocean-based sanctuary for previously captive whales and dolphins is growing.

In the Los Angeles Times, SeaWorld CEO Joel Manby urged America to remember the role that orcas in captivity played in popularizing whales. He is not wrong. When the SeaWorld orca program began, orcas were not the beloved sea creature they are today. The public has come out in support of killer whales largely because we came to know and love them during their time in captivity. Without the shows and meet and greets, we may never have questioned orca captivity programs.

Where is the Free Willy movie for the beluga whale? Where is the Blackfish documentary for dolphins? What about land creatures in zoos? Gorillas are known to be highly intelligent and live in close family units. The case for empathetic, intelligent elephants also is quite strong.

Manby makes another important point: “In the impending crisis,” he writes, “the real enemies of wildlife are poaching, pollution, unsustainable human development and man-made disasters such as oil spills – not zoos and aquariums.”

Orcas that travel the southern route in the Pacific Northwest were classified endangered by Canada in 2001 and by the United States in 2005. A large component of their declining numbers is the quality and quantity of their prey.

This ties into a much larger issue: scientists have predicted “no more fish in the seas” as soon as 50 years from now.

One whale’s sad story may be more compelling than the plight of orcas in general, but saving a single orca from SeaWorld is ultimately less important than saving the species. If public outrage ends at several dozen orcas in captivity instead of extending to the larger problems facing our oceans, the battle for orcas will be lost. There will be none left to protect.