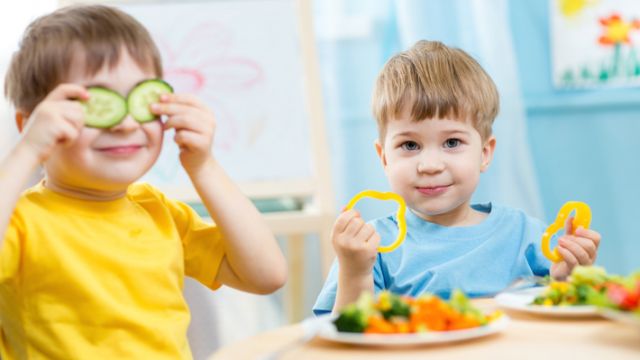 “How to get children to eat more veggies,” is the age-old question that prompted researchers to seek effective methods to encourage kids to choose vegetables. And through the power of persuasion, they found the answer.

Oh, the power of persuasion

Between 10 elementary schools researchers created four groups. For the first group they posted vinyl banners around the salad bar illustrating cartoon vegetable characters with “superpowers.” In the second group, they showed television cartoons of the characters. The third group was shown both cartoons and banners. And the fourth group — the control group — was shown no banners and no cartoons.

The study, conducted for six weeks in 2013, collected 22 observations by totaling the number of boys and girls taking vegetables from the school’s salad bar.

In the schools decorated only with banners, 90.5 percent more students took vegetables. And where the banners were used in conjunction with TV advertisements, the number of students taking vegetables increased by 239.2 percent!

In an interview with the The New York Times, one of the study authors, David R. Just, a professor of applied economics at Cornell, said, “a lot of people have pushed back on this, saying marketing is evil, but I have to disagree. It’s possible to use marketing techniques to do some good things.”

Since fast food-chains use marketing techniques to entice kids then towards junk food, I say, why not fight fire with fire. And it seems that when faced with choices kid’s themselves can be very persuasive. A 2008 YTV Kids and Tweens report, suggests that kids influence lunch choices 95 percent of the time, according to Media Smarts.

“McDonald’s is effective because you see their marketing everywhere,” says Dr. Just. But the problem with putting such programs into practice means schools are left to do their own marketing, “and that’s not cost effective,” says Just. “These need to be national programs.”