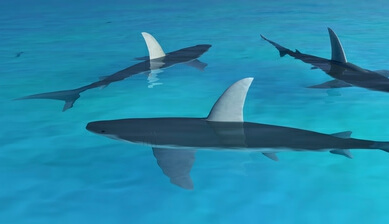 Shark finning is truly inhumane, and not just for the sharks. The entire ecological balance of our planet’s oceans is threatened by this practice. While shark finning is illegal in many countries, including the United States, it is very difficult to regulate, and often goes on illegally due to a huge demand, primarily from Asian countries, for shark fin soup.

Shark fin soup is a broth traditionally eaten as a status symbol in many Asian countries, and is a staple at Chinese weddings. However, largely because of this tradition, approximately 73 million sharks are slaughtered for their fins every year.

As shark fins are one of the most expensive seafood items in the world, retailing at approximately 400 U.S. dollars per kilogram, and as the shark body-meat is comparatively inexpensive and bulky to transport, the fin is often the only part harvested.

Dan Rather recently released a series of videos depicting certain areas of the ocean floor, where hundreds of sharks with their fins cut off lay, unable to swim and struggling to breathe. De-finned sharks sometimes stay alive in this condition for weeks before they die.

Genetic analysis studies of harvested shark fins performed in 2005 showed that a number of fins came from even the most highly regulated fisheries in the world, including the United States Atlantic fishery.

Although the United States has a fins-attached landing requirement to guard against this practice, it has still not been completely effective in stopping finning practices.

Additionally, the genetic studies also revealed fins from great white sharks, one of the most endangered and therefore protected shark species in the world. In 1986, Dr. Julia

Baum logged a population decline of 79 percent in great white sharks, 89 percent in hammerhead sharks, 70 percent in mako sharks, and 65 percent in tiger sharks. Since this time, shark populations have seen an even more significant decline, and many experts are fearing the extinction of a number of species.

Aside from the decimation of endangered shark populations, finning practices are extremely damaging to the natural food chain of our oceans. Sharks are known as apex predators – the top of the food chain – and are responsible for keeping other marine populations under control.

As their numbers are depleted, other predators begin to move up the chain. Squid populations, for example, are growing exponentially. The female Humboldt squid, for example, can have up to 20 million offspring.

As sharks are becoming more and more scarce and are not available to control Humboldt squid populations, the squid are spreading quickly throughout the ocean, clearing out the feeding grounds of other species, along with our fisheries.

As destroying an apex predator can have a domino-effect on all other species in a food chain, it is difficult to predict which other species will be affected, and to what extent.

Recognizing the necessity of protecting precious shark populations, shark sanctuaries have been set up around the world, in countries including Indonesia, Peru and the Bahamas. These sanctuaries protect sharks by strong law enforcement, as well as the support of local communities, which benefit from the marine tourism of the areas.

Despite the best efforts of many countries including the United States, however, shark finning remains a rampant and destructive reality which threatens to make multiple species of sharks extinct, and upsets the balance of the entire ocean food chain.

Until the demand for shark fins is eliminated worldwide, our oceans, and consequently the ecological balance of our planet, are in grave danger.