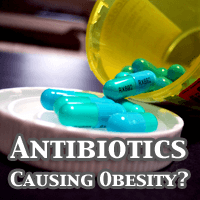 While researchers are still gaining an understanding of how gut health affects our overall health, one thing has become clear – interfering with natural gut microbes can have unforeseen long term impact on multiple health issues. One of the areas of attention from researchers into gut health has been the influence of antibiotics and how it potentially impacts a person’s health.

Rising Antibiotic Use has Dramatic Influence

It is difficult to find anyone who will deny that obesity has become a problem of epidemic proportions in the United States and other developed countries around the world. Researchers at the New York School of Medicine, searching for answers to why weight gain has become such a problem, began to look at methods of causing weight gain in livestock and were intrigued at the common use of low doses of antibiotics to promote increased weight for cows, chickens and other livestock.

The researchers discovered that use of low dose antibiotics actually changes the composition and effectiveness of bacteria populating the gut on animals they tested. Naturally occurring beneficial microbes were killed by broad-spectrum antibiotics, such as those used to treat common infections. They also discovered that with low doses of antibiotics, the animals also gained substantial amounts of weight. In fact, mice that were fed low dose antibiotics gained approximately 10 to 15 percent more fat than their compatriots who did not receive the antibiotic-enhanced food.

It is estimated that children in the United States receive at least one dose of antibiotics every year. In light of the research into the impact of antibiotics on weight gain, it begs the question of just how much the increased use of antibiotics since World War II has contributed to the problem of obesity.

It is commonly known that some of the side effects of taking antibiotics are digestive distress, including diarrhea, bloating and abdominal discomfort. Could it be that by eating livestock grown with antibiotic-enhanced antibiotics, along with taking antibiotics commonly prescribed by doctors is creating the obesity problem in the United States and other developed countries?

If you are concerned with maintaining optimal gut health and avoiding body toxicity, it is time to evaluate your diet and consider your health options.

Have you tried changing your diet with any success or noticed a change in your children when you shifted to less processed foods and included organic, natural whole foods? Let us know about your success stories in the comments below!