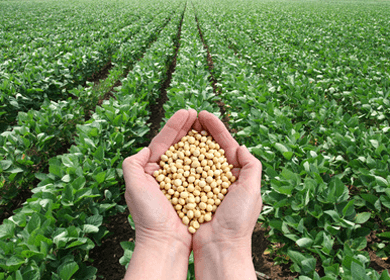 It seems there are a lot of health advocates and vegetarians who espouse and depend on the wonderful health benefits inherent in the little bean we call soy. Well, let’s take a look at this seemingly innocuous and touted ‘health food’ and see where it takes us.

Soy was historically considered an inedible plant (in fact, the raw bean is actually toxic to humans). It has been known for a very long time to be an excellent crop for fixing nitrogen in the soil (it is often still used for this purpose). The Chinese were the first to figure out that fermented soy was good to eat, the first soy products being tempeh, natto, miso and soy sauce. However, the Chinese did not eat unfermented soy products because they knew that they were not good for human consumption. It turns out (amongst other reasons) this is because they contain phytic acid, which contains anti-nutritive properties. Phytic acid binds with certain nutrients, including iron, to inhibit their absorption.

By the late 1900s soy production and incorporation into the food supply began to take off. With the help of Monsanto, soy went from 8% genetically modified in 1997 to 93% genetically modified in 2010. Another interesting statistic – 98% of soybean production in North America is used for livestock feed, including pet food. Note: soy-based animal feed has been shown to disrupt normal development in animals as well as induce disease conditions that are not normally present with their natural diet. One study of mother rats fed a diet of GM soy before giving birth resulted in over 50% of their babies dying whereas for the non-GM group the death rate was below 10%.

In fact, soy in one of its many forms can be found in an incredibly large number of food products we buy at our local grocery store – almost all of these are non-fermented soy, i.e., the ‘bad’ kind.

The story doesn’t get any better. Soy is well known to be an estrogen mimicker, and studies have shown that a soy-fed baby receives the equivalent of five birth control pills’ worth of estrogen every day.

How did something that was originally considered inedible (except in fermented form) become such a huge staple in our diet? One simple word: profit. Companies have been able to take a basically inedible plant, genetically engineer it (for disease resistance and much larger crop yield – i.e., not ‘health reasons’), promote its use through government subsidies (making it a very inexpensive ‘food’ alternative) and even getting the IMF to help fund soy processing in various countries around the world – ensuring that soy is here for the long term.

So, the campaign to convert the world’s food supply to be heavily reliant on GM soy continues – despite a growing body of evidence to suggest that we all should really just avoid soy – unless it is organic, fermented soy.

There is a lot of well-researched information you can find on soy. If you currently consume soy (and it is very likely you do whether you know it or not given how many products include soy in them), we strongly recommend you do further research before continuing your current soy consumption. We believe the evidence is really stacking up against soy.