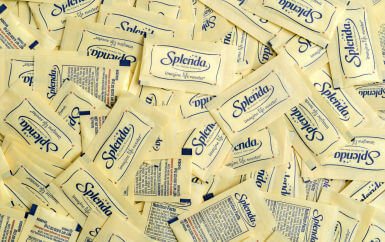 You will find artificial sweeteners almost everywhere today. They are an obvious additive in diet soft drinks and other reduced-calorie foods.

While it’s no revelation that the safety of aspartame, acesulfame potassium and saccharin have been extremely controversial since these chemicals hit the market, sucralose (known as Splenda) has been touted as being the “safest” of the chemical sweetener lineup…until recently, that is.

As of June, the Center for Science in the Public Interest (CSPI) has downgraded the once thought to be safe sweetener from “safe” to “caution” on its “Chemical Cuisine” list of food additives.

The downgrade comes following the results of a yet-to-be-published Italian study linking long-term consumption of the sweetener with leukemia in lab mice. Even more alarming is the fact that the only other long-term testing of sucralose performed was by the sweetener’s manufacturers.

In a statement by CSPI’s executive director, Michael F. Jacobson, “sucralose may prove to be safer than saccharin, aspartame, and acesulfame potassium, but the forthcoming Italian study warrants careful scrutiny before we can be confident that the sweetener is safe for use in food.”

The Italian-based study is not the only one causing alarm for the pro-chemical sweetener manufacturers. A recent study published in the medical journal, Diabetes Care, found that sucralose does indeed impact blood glucose even though it has been touted for years as having zero effect.

Researchers at Washington University School of Medicine in St. Louis found that obese individuals who consumed a sucralose-sweetened beverage before taking a glucose challenge test showed blood sugar peaks as well as 20 percent higher insulin levels when compared to those who drank plain water.

These new findings suggest that the zero-calorie sweetener poses not only a diabetes threat, but can be dangerous for those already struggling with the disease. Couple these findings with the link to leukemia and it’s a wonder how this sweetener is still allowed on the market. The fact that it is on a list entitled “Chemical Cuisine” should be a red flag for most health-conscious individuals.

For those looking for a healthier sweetener options, natural sources like stevia extract (make sure it’s green, not white) and coconut sugar are very low on the glycemic index.