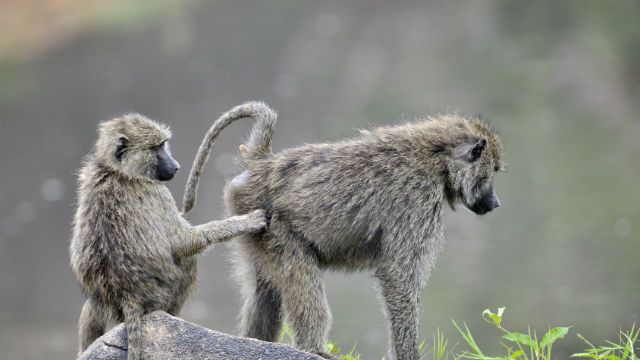 A long-term study out of Duke University seems to underline the fact that social interaction is important for the survival and health of many species. Numerous studies have proven this true for humans, and new research has confirmed the same for baboons.

The study of more than 200 wild female baboons, analyzing 27 years’ worth of near-daily records of the animals living in the plains of southern Kenya, found that the most sociable females lived two to three years longer than those that were socially isolated. Socializing with males in particular, gave them an even greater longevity boost than socializing with other females, researchers found.

Baboons take turns grooming each other to make friends and cement social bonds, which involves picking dirt and parasites and dead skin out of each other’s fur.

Co-author of the study, Susan Alberts, noted, “Grooming is the baboon equivalent of gossip, or having a good conversation over a cup of coffee.”

The researchers believe there are many possible ways that social interaction may be improving a baboon’s odds of survival and longevity, such as reducing chronic stress and boosting immune system as well as improving access to food and water.

The females’ interactions with other females was said to have grown less frequent as they aged, whereas interactions with males stayed about the same, similar to what often happens with older adults. Alberts remarked, “If social isolation is simply an inevitable consequence of age-related declines in health and energy, then we would expect to see similar declines in both same-sex and opposite-sex relationships.”

But the results of the study seem to suggest otherwise. Alberts adds, “When females get older, many of their female peers start to pass away, and their daughters become tied up with their own infants, leaving less time for social interaction. It suggests that social isolation isn’t an inevitable part of aging, but instead may simply be a consequence of declines in potential friends’ availability.”

The research is an excellent reminder of why relationships with close friends and family members is so important.

Just one of the many studies connecting human longevity to social relationships was published in the July 2010 issue of PLOS Medicine. The research found that people with lots of close friends and family around will likely live significantly longer than those who are more isolated. In fact, the study authors say the protective effect of having lots of healthy and fulfilling relationships is comparable to that of quitting smoking.

Julianne Holt-Lunstad, PhD, associate professor of psychology at Brigham Young University in Provo, Utah, told WebMD in an email, “Our social relationships are important not only to our quality of life, but also our longevity. Throughout human history, we have relied on others for survival such as protection and food, and despite modern advancements that may [help with] certain aspects of survival so that we can live more independently, it appears that our relationships nonetheless still impact odds of survival.”

The research involved analyzing 148 studies that examined the effect of social relationships and death risk. Together, they included more than 300,000 people who were followed an average of roughly 7.5 years. They were 50% more likely to be alive if they had strong social relationships – regardless of age, gender, cause of death or health status.

Instead of spending all of your free time surfing the web, watching television or other non-social activities, make time to foster your existing relationships, as Holt advises. Stay in touch with your old friends, invite a co-worker to lunch and look for ways to meet new friends such as getting to know your neighbors or getting involved in your community. Giving and being supportive of others, rather than receiving, is another great way to increase your longevity.

Just like the baboons, we need each other to better our well-being and to live longer.