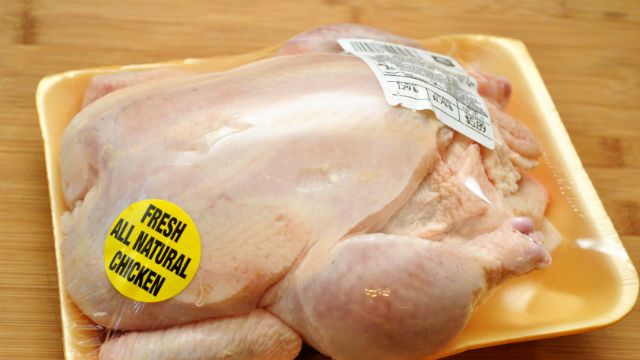 When doing your routine grocery shopping, how often do you handle raw poultry packages without using an extra plastic bag?

According to a new study sponsored by the USDA, most of us do not use this precautionary measure, leading raw poultry juices to quickly spread to our shopping carts and other food items.

Some of the stores visited were small family-owned grocers, and others were national chains. The shoppers knew they were part of a study, but did not know what was being studied.

Researchers followed these shoppers as they did their groceries to track their habits when dealing with raw poultry, and then swabbed the surfaces of their carts and other food items – and also their children – after shopping was complete. Results showed that less than 20 percent of the shoppers used a store-provided plastic bag or a hand sanitizer after touching packages of raw poultry.

This discovery is disturbing due to the fact that earlier this year, Consumer Reports analyzed raw chicken samples and found that 97 percent housed potentially harmful bacteria.

Among the samples, 43 percent carried Campylobacter and 11 percent carried Salmonella. This bacteria can be transferred by raw poultry juices to everything it comes in contact with. According to this study, that’s quite a lot of items, and people.

During the IAFP presentation, Dr. Chambers recommended that all shoppers utilize the plastic bags provided when dealing with raw poultry, taking care not to touch packages directly. He also stated that hand sanitizers should be used after handling raw poultry and meats, and that these items should always be put in a separate bag in the fridge or freezer.

While this is good advice, we want to add a note on antibacterial hand sanitizers: as we recently reported, these products may contain potentially harmful chemicals, and may actually be contributing to the epidemic of antibiotic resistance.

You can still keep your hands clean and keep germs from spreading without it: simply use an extra plastic bag when handling raw poultry or other meats.

To disinfect your hands (and the hands of your kids) as you shop, all you need is a little spray bottle (or squeeze bottle) of witch hazel: it is a natural, non-drying antiseptic that does not contain the chemicals of antibacterial hand gels.