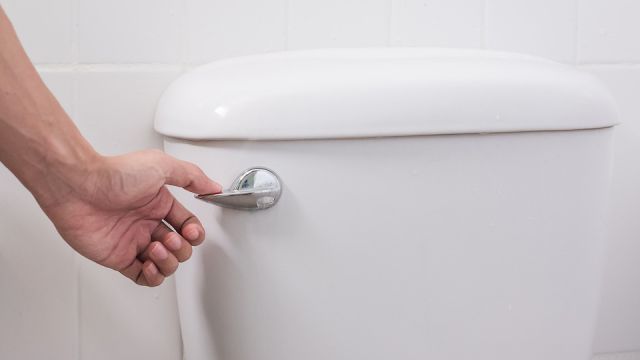 Personal hygiene has come into the spotlight in recent times, with everyone being encouraged to take extra care in the name of preventing viral spread. Although most of us would prefer to keep our toilet practices private, now more than ever, we’re having to “open the door” on our hygiene habits to ensure we’re doing our part.

One particular issue has come to light, with experts urging us to ensure we complete this critical step after doing a “number two” in the toilet. Is it washing your hands? Surprisingly not. Although, of course, we must be sure to do that too.

Research has revealed that poop could play a significant role in disease transmission, and we must contain it by doing this one thing after using the toilet…

What’s the one thing you must always do after you poop? Close the lid. Why, you ask? Isn’t the poop encompassed by the water? Some toilets in public restrooms don’t even have lids, after all! Researchers have recently highlighted the risk of ‘toilet plume’, which makes poop particles turn into a lightweight aerosol spray with the force of a flush. The sudden gush of water creates “substantial quantities” of “potentially infectious” particles, which can last in the air for up to 8 minutes after the flush. More particles are also created by each subsequent toilet user and can remain adrift on air currents in the room.

Another study found that airborne microbes from flushing the toilet could contaminate surfaces, then spread infection amongst humans via direct transmission from the surface to hands, and then to the mouth. Some viruses also persisted in the air after toilet flushing, which means that viruses could be caught as a result of inhalation and swallowing.

Some historically significant viruses, including SARS coronavirus and H1N1 influenza, have both shown the potential to spread via droplets. Scientists have discovered that this could be a way to monitor the spread of the new Coronavirus, COVID-19.

A recent study reported that a high proportion of COVID-19 cases excrete the virus with feces and that testing sewage could serve as an early-warning system when the virus has affected an area. In the study, sewage from several cities and an airport in the Netherlands was tested for some particular marker proteins, which indicate the presence of the virus. The researchers found COVID-19 in the wastewater in the city of Amersfoort on March 5, before any cases were reported in that city, but after the Netherlands reported its first case in the country. This type of sewage surveillance could help with planning public health measures and resource allocation and also flag up any future re-emergence of COVID-19.

Importance of lid-closing in your home

So, we know that virus-ridden poo is potentially floating around in the public system. But you might be wondering, is there any danger in your own home from aerosol poo particles? Luckily, most household toilets are low-flush gravity-flow toilets that don’t create much force. However, vigorous high-pressure toilets found in public restrooms often create a substantial amount of water pressure and resulting vapor. Unfortunately, the US Uniform Plumbing Code specifies a lidless design for public toilets, which is contra-indicated by studies highlighting concerns around the aerosolization of feces in the absence of a lid. Overall, research shows that toilet plume seems to be the biggest concern in hospitals where more sick and immune-compromised people are present, and the toilets have the highest flush energy.

What Should You Do To Protect Yourself From Poo Spray?

If you’re feeling understandably paranoid, don’t worry; there are measures you can take to protect yourself.

Ultimately, you shouldn’t panic about the plume, as gross as it is. We are exposed to germs all the time, with the majority being dealt with easily by the immune system. Remember, it never hurts to take steps to boost your immune system to give it the support it needs to keep viruses at bay.