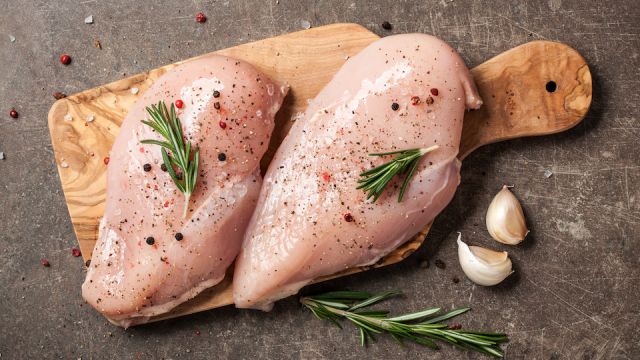 You may be starting to see more chicken at your grocery store labeled “air-chilled.” According to the USDA, processed chicken needs to be chilled down to 40 degrees within four hours of slaughter. In the industry, this can be achieved using air or water. Most of the chicken you find at your local grocer is cooled in large communal vats using ice cold chlorinated water. During this process, the chickens absorb some of the water. When air chilled, chicken passes through purified cold air to reduce the temperature. But is there an advantage to air-chilled chicken?

Producers have been air-chilling chicken in the U.K.for over thirty years, and it is becoming more commonplace in the United States. Stores, including Whole Foods, Costco, and Publix, all sell air-chilled chicken. If you don’t see the label, you can assume that it is water-chilled.

Here are some things that you need to know about air-chilled chicken.

In traditional processing, chickens are first slaughtered, cleaned, inspected, and then immersed in generally chlorinated water below 40 degrees F. After about 45 minutes, the chickens are moved on to a chill tank by paddles where they spend between 45 minutes to an hour being cooled. Once the optimal temperature is reached, the birds are moved to a shake table and a drip line to remove water. After this, chickens are packed whole or cut up into small pieces.

In the air chilling process, chickens are hung or sent on a conveyor belt through two large chambers and blasted with ice cold air. In the first chamber, the temperature of the chicken is reduced by about 75%. The second chamber takes the temperature down into the low 30’s.

Not all air chilling is created equal

Some producers use a method to cool chicken, which is a combination of water and cold air. Look for USDA 100% pure air-chilled chicken.

According to Charlie Moore, president of sales and marketing at Denver-based Maverick Ranch Natural Meats, consumers love his air-chilled chicken.

“Consumer acceptance is very high. I’ve yet to receive even one consumer complaint on our free-range, air-chilled chicken. Most consumers claim it’s simply the finest-tasting and juiciest chicken they’ve ever eaten. They immediately recognize there is a difference, that it has exceptional palatability. The accolades from our high-end white-tablecloth restaurant chefs are second to none.”

Those in favor of air-chilled chicken report that the meat is moist even when compared to chicken that has been loaded with sodium phosphate and water. In addition, if you love chicken that has crispy, golden skin, air-chilled is ideal because the process uses no added water.

Chicken chilled in water can become waterlogged during processing. This water leaks into the package and any that remains in the meat evaporates out and tends to leave the chicken dry and unable to take on any seasoning or flavors.

Probably one of the best things about air-chilled chickens is that they are less susceptible to food-borne illnesses like salmonella. Since air-chilled chickens are cooled individually, not in a communal pool, there are considerably less opportunities for bacteria to spread. A University of Nebraska study found that chicken processed by air chilling contained 80% less bacteria than water-chilled chicken.

What about the price

Yes, you will pay more for chicken that has been through the air-chilling process, and even more if it is free-range air-chilled chicken. Keep in mind, however, that when you purchase water-chilled chicken, you are paying for extra water leftover in the chicken and the package. This actually means that air-chilled is a better value – pound per pound. Producers are not having any problems selling this high-end chicken to discerning consumers looking for more natural, better-tasting products.

Are you ready to serve your family air-chilled chicken tonight for dinner?