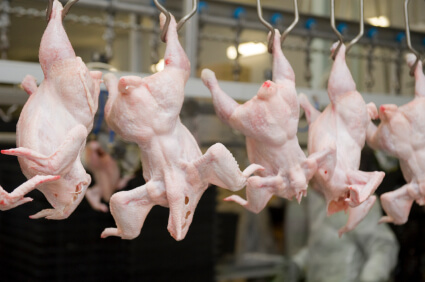 The USDA has proposed new regulations to streamline the current poultry inspection process. Since 1998, they have been running a trial program which would be fully in place by 2014. Modernization of current poultry slaughter and inspection is meant to remove what is called “unnecessary regulatory obstacles to innovation.”

However, reducing inspectors also means an increased use of antimicrobial products to reduce E.coli and Salmonella. Changing the current system of slaughter and inspection would do the following:

Presently, poultry is sprayed with water and chemicals inside and out as they are escorted through spray cabinets. They are soaked and chilled in water that contains between 20 and 50 ppm of chlorine. Under the new system, chemicals would be used on “air-chilled” birds where low temperatures currently kill pathogens and discourage their spread.

Chemicals will be used all along the processing line, not just at the end. Because chemicals used in poultry plants are designed to kill bacteria, they are poisonous.

There have been several incidences of poultry inspectors developing severe respiratory problems from breathing in chemicals. More than two dozen inspectors have reported burns, rashes, sinus problems, severe breathing problems and asthma as a result of chemicals.

The Washington Post reported that a federal inspector died with his lungs bleeding out after working for six years in plants where chemicals were used. Two of the most common chemicals used have been linked to internal organ damage, emotional disturbances and even death. While USDA workers are informed about the risk of chemical exposure, the American public gets no such warning.

Scariest of all is that the chemicals being used have not been independently tested for safety, and the only data provided is from the chemical manufacturers themselves.
The USDA has released no data about the current pilot program, but according to a report to the House Appropriations Committee – the USDA plants already use accelerated line speeds and more sanitizing chemicals than ever before.

A disturbing Freedom of Information request by Food and Water Watch indicated that employees are not catching defects in poultry carcasses because of a reduced number of inspectors, increased line speeds and lack of inspector training.

While the government will save big to the tune of over $90 million and the poultry plants will increase revenue under the new system – consumers will pay the price.

The government continues to ignore real food safety and refuses to adopt and support sustainable, natural and humane methods for raising animals without the use of deadly poisons.

When will it stop?

Remember, eat local, eat organic and eat well. It is the only way to protect yourself and your family.