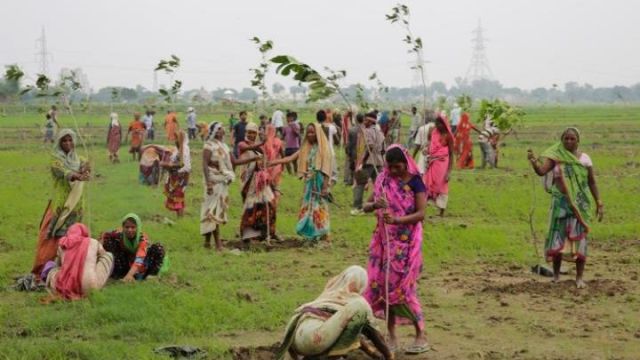 People in the Indian state of Utter Pradesh are attempting to break the world record for the most amount of trees planted in a 24-hour period.

In 2013, people in Pakistan planted 847,275 trees. Citizens in India are planning for well above that figure. With 800,000 people involved, they are aiming for 50 million trees. Even if they just manage to get close, their efforts will have a significant impact on climate change and the local environment.

At the time of writing, The Times of India had reported that 49.3 million saplings had been planted by the 10 a.m. deadline. It could take several months to determine whether or not this mass effort made it into the world records.

The local government gave the over 800,000 people millions of saplings to plant along designated roads, rail tracks and forested areas.

The record follows another one last year, when a team of 100 volunteers in Bhutan planted 49,672 trees in one hour. Senior Bhutanese journalist Namgay Zam says team members planted an average of eight trees each per minute on steep and unfriendly terrain.

The government of the mountainous Himalayan country emphasizes protecting the environment. Bhutan has more than 75 percent forest cover. Bhutan does not use GDP as a measurement, instead subscribing to the GNH – Gross National Happiness index, and the health of its environment is a key factor in calculating that figure.

At the Paris climate talks last December, the Indian government pledged to increase forest cover to 95 million hectares (235 million acres) by 2030. The government has allocated $6.2 billion for the effort and is encouraging all 29 states to run their own tree-planting drives.

The government plans to use aerial photography to monitor the tree planting sites, and see how many saplings are growing. Typically only around 60 percent of saplings survive, officials said. In Utter Pradesh, only 6 percent of land is forested, according to the Forest Survey of India.

Nationally, 21.2 percent of the country is forested. If the government meets its goal of 33 percent forest, it will be sequestering 2.5 billion tons of carbon.

Meanwhile, globally, there are 3 trillion trees, less than half than at the start of human civilization. The United States is 33 percent forest area.

Not only does living near trees make you live longer, but planting them has a number of benefits:

To plant a tree, first dig a hole that is two to three times as wide as the root ball of the tree (that’s that mess of roots and dirt that form a ball). Place the tree in the hole, and fill in around it, lightly packing the soil. If you pack too hard, it will be hard for the roots to grow out. Often, it helps to drive a stake into the ground, or even a few for larger trees. Then make sure to water the tree daily for several weeks so those roots can grow out.

Imagine what we could do for the world if we all regularly planted trees, or if we all followed in India and Bhutan’s footsteps. Imagine fruit trees just everywhere…

What’s stopping us, and why?