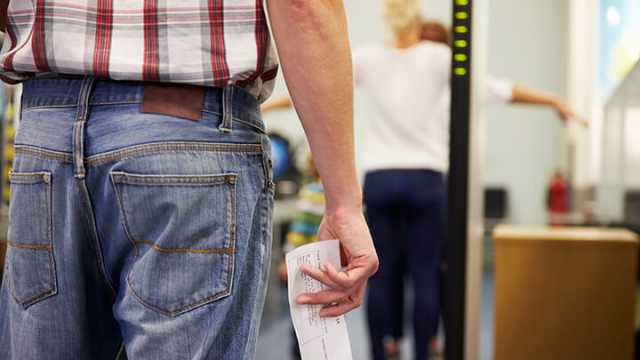 Hopefully, you’ve never had to experience the humiliation of an aggressive public pat-down. But, thanks to the state of security in our national airports and the Transportation Security Administration (TSA), most of us have. And, there are no exceptions to the rule — even for a woman in pain battling breast cancer.

Manhandled and humiliated by TSA

Television and radio personality Denise Albert recently experienced an aggressive pat-down by TSA agents at Los Angeles International Airport. And while the scenario is fairly common, the circumstances are not.

Albert, 42, has breast cancer and previously flew over the course of her cancer treatment. But, her recent experience with the TSA was the first-time Albert was subjected to the treatment shown in a video she uploaded to Facebook. The co-host of “The Moms” radio show was traveling with colleague Melissa Gerstein, who shot video footage of the pat-down.

For those receiving cancer treatment, airport security can be tricky, to say the least. Particularly when the patient has a port inserted under their skin to allow chemotherapy to be administered more easily. Such was the case with Albert. Meanwhile, other issues such as open sores and medical creams can further complicate traveling.

Albert first went through a pre-check. But once through the scanner, she was asked to take off her shoes. Due to open sores on her feet that were prone to infection, she couldn’t wear socks, and thus couldn’t remove her shoes. However, because of her medical condition, she should never have had to remove her shoes, according to TSA standards, which reads, “You are not required to remove your shoes if you have disabilities and medical conditions.” They do note, however, that the shoes must undergo physical examination.

She also notified the TSA agents that she was carrying medical cream to treat an infection and removed it from her luggage. Although TSA agents allowed her to sit down in order to X-ray her shoes, they forced her to hold her feet above the ground while they applied pressure to her body, including on her head. Due to cancer-related hair loss Albert wears a wig, and “didn’t want them to touch it, move it or ruin it.” She eventually removed her wig to allow the agents to examine her head.

As TSA patted her down, Albert expressed discomfort. So, they offered her a private room, but refused to allow her to put her shoes on in order to walk there. When she asked why she was being subjected to additional screening, she was told it was because of the medical cream she was carrying —although it had gone through screening. The TSA agent attempted to feel Albert’s chest even though she refused out of concern for her port and a recent lumpectomy. Albert is heard in the video telling the TSA agent that she has a port on her chest.

‘Just a game’ for the TSA

Although the video ends, Albert goes on to explain on Facebook that she grew frustrated and lifted her shirt, rather than have the agent’s touch her breasts and port. TSA agent then said they were calling law enforcement, to which Albert replied, “Please do so.”

A supervisor then allowed Albert to put her shoes on and go to a private room for a soft pat down. She applauded the supervisor for showing compassion along with a flight attendant who “made everything better for the night,” she told WABC. Still, she wanted to see the other agents fired because they didn’t follow any protocol and it appeared to be “a game for them,” says Albert.

Thousands of other stories

Sadly, Albert is only one of many who have received this type of treatment during screenings. And while some may argue that TSA agents must follow protocol, many Americans are being forced to undergo an extremely intrusive and humiliating pat-down search. It is unlike anything most people have experienced before.

In fact, The American Civil Liberties Union (ACLU) says that since the policy came into effect, they have received more than a thousand complaints. Travelers say the TSA has subjected them to invasive and groundless searches.

In 2013, a video posted online showed a TSA official searching a wheel-chair bound, three-year-old girl on her way to Disneyland. The heartbreaking video clearly depicts how intrusive and unnecessary these searches can be. Since then, the TSA said they have eased some airport security measures for children under age 12 and elderly over the age of 75. Unfortunately, for those like Albert who suffer from a medical condition, that’s not the case.

Does the TSA take it too far?

Although I don’t suffer from cancer, I was recently patted down by a TSA official. Standing with arms extended, she patted my breasts — repeatedly — while other travelers looked on. She said the reason was because of the small metal embellishments on my t-shirt.

Meanwhile, Albert has filed a formal complaint with the TSA. The agency is investigating and issued a statement saying it “deeply regrets the distress additional security screening caused Ms. Albert.” As a result of the handling she received, Albert said she was contacted personally by the TSA. An agent said they would refresh training at the Los Angeles airport on how to screen people with medical disabilities.

What’s your experience with the TSA? Do you think they could try a different approach with those undergoing medical treatment? Let us know.