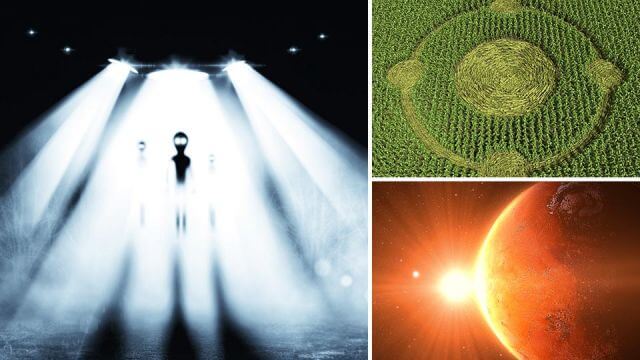 Our world is an amazing and wondrous place filled with mysteries so baffling they could only be explained by… aliens? Whether it’s a crop circle or the face on Mars, many of these mysteries have no plausible scientific explanation. Therefore, it’s easy to see why so many people believe that ancient alien technology may have had a hand in creating structures like the Pyramids of Giza. But it doesn’t end there. Here are some of the many mysteries believed to be linked to aliens.

They appear mysteriously overnight on farmers’ fields around the world. But, despite having been studied for decades, the question remains: Are aliens creating these? The sheer size alone of these formations in the grass, not to mention the complex designs, seem to defy any logical explanation. Some suggest that these circles are manmade with little more than boards tied to the feet. However, to crop-circle enthusiasts and ufologists the idea is laughable. There is absolutely no comparison to the off-kilter circles made by hoaxers in a 24-hour period, versus the complicated designs that appear overnight.

The first real crop circles didn’t appear officially until the 1970s, according to LiveScience, when simple circles began appearing in the English countryside. From there, an explosion of circles erupted, each more complex than the next. By the 1980s and 1990s, even more elaborate circles began to appear that included intricate mathematical equations. One of the most famous being an 800-foot crop circle that appeared in Wiltshire, England, across from the infamous Stonehenge, back in 2001. The design consisted of 409 circles that form what’s known as a triskelion — a symbol that dates back thousands of years — according to Collective Evolution.

Here’s why crop circles are most likely extraterrestrial:

2. Mysterious trumpet sounds in the sky

Is it the apocalypse or alien spaceships lurking in the clouds above? Mysterious trumpet sounds coming from the sky have been heard around the globe. Some say the sounds are eerily similar to trumpets, while others claim they sound more like trains. Meanwhile, according to Tech Times, NASA scientists believe the threatening noises could potentially be the “background noise” of the Earth — otherwise known as “Ambient Earth Noise.” Since this still lacks scientific confirmation, speculation continues about potential alien involvement in these “trumpet noises.”

3. The mysterious beeping noise in the Arctic

There’s a strange beeping noise coming from the Canadian Arctic that has scientists baffled. In fact, the mysterious sound is driving away animals. And according to Olivia Solon for The Guardian, it’s become so concerning that the Canadian military is now involved. The beeping noise was first heard late last year by Inuit hunters in the village of Igloolik, between the Northwest Passage and Hudson Bay, off the Fury and Hecla Strait. The shallow strait is usually frequented by narwhals, bowhead whales, ringed seals and bearded seals.

But last year they all disappeared, say Inuit hunters, who believe the beep is responsible for scaring away the wildlife. Whatever the origin, this noise “comes from the bottom of the sea” and is loud, said Paul Quassa, a local elected official in the Nunavut legislative assembly after going to the spot with a group of indigenous hunters who first reported hearing it. So, what’s causing this anomalous beeping noise? Well, one theory suggests UFOs are operating under the ice.

Spotted by the Viking 1 orbiter in 1976, the so-called face on Mars is nearly two miles long and is in a region called Cydonia. However, at the time, scientists dismissed the Martian “face” as shadow play. Then, in 2001, NASA’s Mars global surveyor took another look at the Mars face, this time using a much higher resolution camera. But (sigh) they found nothing more than what appeared to be a landform. Yet, conspiracy theorists insist that the “face” is an artifact from an ancient Martian civilization and the center of a NASA cover-up. In fact, according to Mail Online, some skeptics even believe that weather during the later flyovers obscured the human features and are still convinced it is an alien-made structure.

The Sacsayhuaman, one of the most mysterious architectural sights, is a fortress built between 1438 to 1471. It sits outside the old Inca capital of Cusco, resting in the Peruvian Andes. The megalithic walls are constructed from stones — some weighing over 100 tons — that have been precisely chiseled and stacked together like a jigsaw puzzle. In fact, the stones are so tightly fit, that even a sheet of paper could not fit in between them.

According to the History Encyclopedia, the Incas were master stonemasons, who quarried the humongous blocks and shaped them using nothing more than harder stones and bronze tools. But that seems highly unlikely, since the construction seems to perplex modern-day builders and engineers. Yet, somehow the ancient builders were able to quarry and move the rocks to the location. Some say Sacsayhuamán could possibly be the work of an ancient civilization that had a help from interstellar friends. Ancient alien enthusiasts say yes!

6. Hologram city in the sky

Earlier this year, in the skies above China, thousands of people witnessed what appeared to be a hologram of a city. Some are calling the apparition another dimension created by aliens who are “highly interested” in humans. Strangely, the same apparition also appeared back in October 2015, again with thousands of people reportedly witnessing the “ghostly alien” city. But it didn’t end there, the floating city was also reportedly spotted in other provinces in China. Some experts claim the apparition to be a natural mirage. But alien conspiracy theorists don’t agree. What do you think?