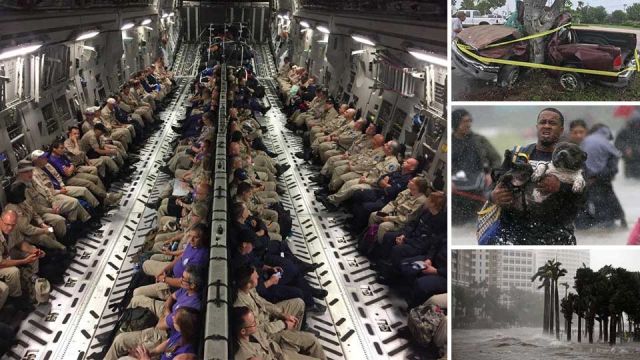 Hurricane Irma battered Florida with triple-digit wind and left many residents without electricity. It hit lower Florida Keys with wind speeds of up to 130 m.p.h. early on Sunday morning. Many streets of Miami are now submerged under water, and three construction cranes collapsed. Though the hurricane has now been downgraded, it still has sustained winds of 70 m.p.h. as it moves further inland.

“Power lines are down throughout the state. We’ve got roads that are impassable, so everybody’s got to be patient as we work through this,” said Florida governor Rick Scott. Florida is now launching a relief operation, with care needed for victims, cleaning up of debris and restoration of power as the top priorities.

Irma destroyed Maho Beach in St Maarten. The destruction from the hurricane was worse in the Caribbean islands than in the U.S.

A collection of footage of Irma hitting Florida keys.

The hurricane peels off a roof in Florida Keys.

Furniture is scattered along the roads in the aftermath of Irma in Florida.

One man captured footage of winds from his Florida home.

Brickell Bay Drive in Miami looks like a river.

JUST IN: Power outages from Hurricane #Irma rise to about 2 million in Florida – FPL, other utilities https://t.co/CqYxQg1RmX pic.twitter.com/1gPC37fh73

#StormSurge wasn’t modeled to be this high along the #Miami River. Not even an evacuation zone! Up to 3 ft and rising #Irma #HurricaineIrma pic.twitter.com/iTEwrPHkp9

How many ‘worst storm’, ‘hottest temp’, ‘largest natural disaster’, do we face before we #ActOnClimate @realdonaldTrump?#Harvey #Irma pic.twitter.com/QSb4kDYAPx

Crane in Miami, Florida partially collapses in the winds of Hurricane #Irma

BRUHHHH how Ima get in my house man 😭 #hurricaneirma2017 pic.twitter.com/sZq6MvdlZC

#IrmaAftermath stay safe out there if you need to head out. Nice to see the sun thru fallen trees. @weatherchannel #hurricaneirma2017 pic.twitter.com/ns5DcB4avP

#hurricaneirma2017 hoping we all made it through. This was a tough one. pic.twitter.com/75mRBr2Dcv

200 y/o oak that took out the power in my sister’s neighborhood in downtown Orlando #hurricaneirma2017 pic.twitter.com/Q4yIvKVHRH

#hurricaneirma2017 had quite the force to uproot this tree out of the ground in Sumter County pic.twitter.com/S4IW00BJgi

.@andysullivan and I talking to Keys residents waiting to get back home and survey the damage #hurricaneirma2017 pic.twitter.com/sdfRHiTuuL

When #hurricaneirma2017 gives you a lake, you don’t complain, you thank #MotherNature for sparing you. #Orlando #StaySafe pic.twitter.com/ZDh54kpyRO

No power after #hurricaneirma2017 still can make coffee though. pic.twitter.com/DwEQvQVEh7

Tree down on the house causing 2 leaks in the roof. This is in Lake Mary. Still have power. @Fox35Amy #hurricaneirma2017 #Fox35NewsWeather pic.twitter.com/WZXWnquw3P

#hurricaneirma2017 knocked over a truck trailer onto sidewalk and downed many trees at NDN offices in North Naples. pic.twitter.com/Ce3FzwssLV

The fence along the front of my building took a hit. The cement pillars were dug 2 feet deep. #HurricaneIrma #hurricaneirma2017 pic.twitter.com/2Ng6ZZEydf

Apparently I now have a lake view. But so grateful not worse here in #orlando. Winds raged all night. #hurricaneirma2017 #florida pic.twitter.com/UU6QOOrcKT

The breaking of Day – We made it through that rough high windy rainy night. Electricity is still on. #hurricaneirma2017 🙏🏾 pic.twitter.com/QVp0BqOrRs