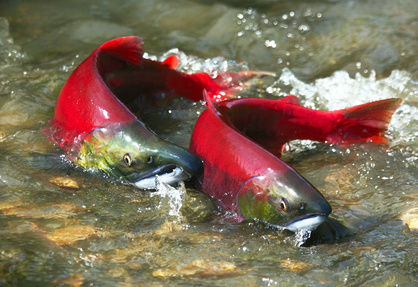 Washington voters fighting to label GMOs may have lost in November, but are certainly not giving up. New bills have arisen in Olympia requiring the labeling of genetically engineered salmon if it is approved, as well as certain other GMO foods.

These new bills were were introduced due to several factors, including AquaBounty’s ‘frankensalmon’ inching closer to FDA approval, as well as the FDA’s possible upcoming approval of two varieties of GM apples, modified to not turn brown when cut or bruised.

Both salmon fishing and apple orchards are key industries in Washington. In fact, about 44 percent of all apples sold in the United States come from this state. The new proposed GM apples, from Okanagan Specialty Fruits, Inc., are to be labeled simply as ‘arctic.’ Environmental groups, including the Northwest Horticultural Council, is highly against the USDA accepting the sale of this apple.

‘Frankensalmon,’ formally known as AquAdvantage salmon, is genetically engineered to grow to full size twice as fast as normal salmon. If approved, it would be the first GM animal on the market.

As we reported in a previous article while AquaBounty assures that the salmon will be sterile and could not breed with wild populations, the Center for Food Safety has pointed to a clause in the company’s own literature which shows that up to five percent of the salmon could be fertile, and could potentially intermix with wild salmon.

For this reason, part of Washington’s new bill states that GM fish cannot be grown in state waters, as bill supporters fear for the safety of salmon populations. It also states that the salmon must be labeled GM. Due to the risk that the fish may pose, as well as the firm stance of much of the population against eating GM animals, many natural food retailers have already vowed not to sell the salmon should it be approved.

Representative Cary Condotta, a sponsor of the bill, said, “salmon is such an ingrained item here. We label farmed vs. fresh caught (fish). Why wouldn’t we label transgenic fish? It just makes sense.”

As it stands currently, the FDA is in the process of reviewing public comments, and states, “we can’t predict a timeline when a decision will be made.”

Last November, Washington’s GMO labeling bill lost by a mere hair: 52 to 48 percent. We hope that these bills fare better.