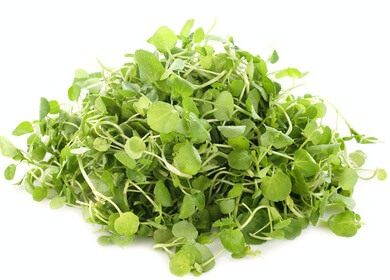 Watercress, now this is a food that we don’t talk about every day. However, this aquatic or semi-aquatic, fast growing perennial plant, which is native to Europe and Asia, is, in fact, one of the oldest leafy veggies consumed by mankind. This aromatic and peppery tasting plant, thrives in fresh spring water.

While its antiquity is interesting for sure, this plant has a lot more going for it than most people might think. It is a superfood in its own right and one that we should all consider adding to our diet.

In the United Kingdom, this plant was often eaten in the early 19th century as part of a healthy breakfast sandwich between bread. If you could not afford bread, you would eat it on its own in bunches. Because of this, it was sometimes called “poor man’s bread.”

The medicinal value of watercress can be traced way back in time. The Father of Medicine, Hippocrates was documented to have located his first hospital near a stream where watercress grew so that he would have plenty for his patients. Sixteenth century Greek soldiers consumed this leafy green before going into battle and herbalist Culpepper noted that it was a powerful blood cleanser.

After its early popularity, many people began to use watercress simply as a garnish due to its frilly appearance. It became a much underappreciated and rarely purchased item. However, recently, its value is being rediscovered through intense scientific research. Once again, watercress is climbing the popularity chart both in Europe and the United States

The nutrient profile of this water lover is indeed quite impressive. It contains over 15 different essential vitamins and minerals. It has spinach beat in iron, oranges beat for vitamin C and milk beat for calcium. This super aquatic plant is rich in phosphorous, potassium, iron, magnesium, beta-carotene, vitamins A, B1, B6, K and E , along with a host of powerful antioxidants.

Watercress has a long list of documented health benefits, here are just a few. 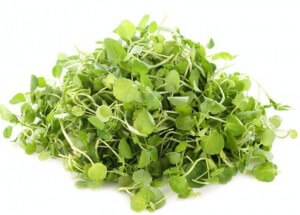 Most grocery stores stock watercress year round. Look for bunches that are perky with deep colored leaves. If it is fresh, it should have a peppery aroma when you rub it between your fingers.

Wash the cress under clean water and soak it for about half an hour in water mixed with a little sea salt. This will take care of any parasite eggs and worms that grow in aquatic conditions.

If you cannot use the whole bunch right away, submerge the greens in water, and they will last for about 3 days in the fridge.