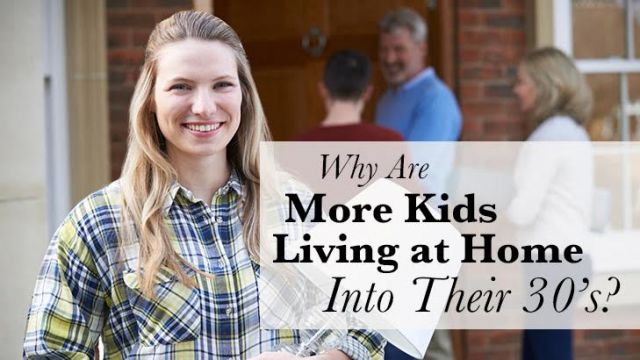 According to a Pew Research Center study released this month, living with parents has become the most common arrangement for Americans aged 18–34. Before this year, the percentage of young people living with a partner was most common.

That isn’t to say that more young people are staying home than ever before. Thirty-five percent of young adults were living with their parents in the 1940s as compared to 32.5 percent today. However, in the 1940s, 46 percent were married and living with their spouses. Today, only 31.6 percent live with a significant other. The number of young people living alone has also skyrocketed from three percent to 14 percent since the 1940s.

Data from the 1960s shows marriage rates at record highs: 61 percent of young Americans were living with a spouse. This left only 20 percent at home with mom and dad. The percentage of those living alone stayed around three percent.

Data on cohabitation has only been collected since 1990. Before this time, cohabitating adults were likely misidentified as housemates.

The role of declining marriage

As one might guess, the decline of marriage has a lot to do with present-day living arrangements. According to the report:

Though cohabitation has become a more popular arrangement since researchers began collecting data on this subgroup in 1990, the rise of cohabitation has not made up for the decline in marriage rates.

Any assessment of changing living arrangements would be incomplete without mention of the economy. That said, it is important not to overestimate the impact of economic distress. Current trends towards living at home began before the recession.

Both the unemployed and those without a college education are more likely to live with their parents, affirming the intuitive logic that people with fewer economic opportunities have less ability to begin their own households. Young men with higher earnings are less likely to live at home.

The picture is a little more complicated for women, though it supports the same narrative. Since the 1960s, women have seen increases in employment and wages, but are still likely to make less than men. They are also more likely to live at home than in the past, but slightly less likely to live at home than their male counterparts. Median wages for young women peaked at $13,800 in 2000. Comparatively, young men’s wages dropped from about $27,300 in 1970 to $15,000 in 2014. Women may have seen gains, but they are still earning recession-era rates.

It is tempting to see the rise of young Americans living at home from a purely American perspective. Our independent tots have been flying from the nest at a relatively early age for quite some time. Compared to other countries, however, our current rate of 31.5 percent of 18- to 34-year-olds living at home is still low. Many cultures expect their offspring to remain home until marriage, and sometimes even longer. Even in a number of Western nations, it is normal for young adults to stay home well into their twenties. In Slovakia, Slovenia and Bulgaria, men typically live at home until they are over thirty years old.

It may be that the US is simply falling into world trends that have long been standard in most countries.