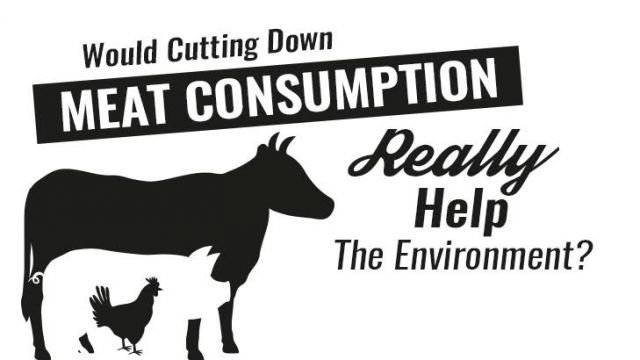 Environmentalists are congratulating China after its government outlined a plan to reduce citizens’ consumption of meat by 50 percent. But vegetarians and meat eaters have long fought it out over whether a meat-free or meat-limited diet is actually better for the environment.

China’s new dietary guidelines recommend people consume between 40 to 75 grams of meat a day. That’s down from an average of 170 grams a day. The average American consumes twice that.

Schwarzenegger last year also advocated that people go “part time vegetarian to protect the planet.” He told BBC News that farming was creating 28 percent of global greenhouse gases, but that asking people to go totally vegetarian would be too demanding. He also noted that many bodybuilders are vegetarians, as “you can get your protein many different ways.”

According to The Guardian, should China’s new guidelines be followed, carbon dioxide equivalent emissions from China’s livestock industry would be reduced by one billion tons by 2030. However, statistics quoted in The Guardian differ from those offered by Schwarzenegger. The newspaper claims that only 14.5 percent of greenhouse gas emissions come from keeping and eating cows, chickens, pigs, and other animals. Nevertheless, the figure is still higher than the entire transport sector.

Meat eater arguments against the environmental value of vegetarianism

Livestock emit methane, a highly potent greenhouse gas, while land clearing and fertilizers release large quantities of carbon. Some meat eaters argue that genetically modified soy is worse for the environment, even though many vegetarians don’t eat soy. It is, however, a major crop for chicken feed.

Still, one controversial report by researchers at Carnegie Mellon University found that eating lettuce was “over three times worse in greenhouse gases than eating bacon.” The researchers argued that some vegetables require more resources per calorie than expected. The logic was that meat provides people with more energy, so those who eat mostly vegetables (another myth about vegetarians) have to eat more of those vegetables to get the same amount of energy. In fact, it is foods like rice, oats, coconut milk and oats, not meats, that provide people with the most energy.

The CMU study also looked at the emissions produced from growing, processing, and transporting food, and claimed that if people ate more vegetables, fruits, dairy, and seafood, energy use would increase by 43 percent, and their water footprint by 16 percent.

However, as Hilary Hanson at the Huffington Post pointed out, while it’s true that “not every plant product is more environmentally friendly than every meat product,” staples like rice and other grains actually have the lowest emission per calorie rates.

A separate report by scientists at the Oxford Martin School this year found that the widespread adoption of vegetarianism around the world, or even significantly reducing meat consumption, could bring down greenhouse gas emissions by nearly two-thirds by 2050. The figure represents yet another different number on how much meat production contributes to emissions; it is based on projected increases in intensive agricultural practices geared towards rearing livestock.

Intensive livestock-rearing causes greenhouse gases via the methane produced by animals, and through the massive slurry pits (manure in water) that come with large farms. It diverts water and grains to animal rearing, which is less efficient than humans directly consuming those resources.

Further, raising animals and their food takes up a lot of land: a whopping 30 percent of habitable land, according to Chooseveg.com and 80 percent of the deforested Amazon. And in the United States, 70 percent of harvested grains go to feeding livestock. This land use translates to overgrazing and decreased soil fertility, massive soil erosion and desertification.

A single industrial farm can now generate as much waste as a city, according to The Guardian. For every kilo of beef, a cow excretes 40 kilos of manure, which is funnelled into cesspools that often overflow, polluting underground water supplies and rivers with phosphorus and nitrates.

Finally, as much as one-third of all fossil fuels produced in the United States now go towards animal agriculture: they are used in the production of fertilisers, for pumping water, and for transporting meat in giant refrigerated ships.

But it’s industry methods, not the food, that’s decisive

The Guardian states that an average British carnivore eats over 11,000 animals in his or her lifetime, but ultimately the onus of responsibility lies in the hands of the industry, rather than individual consumers. Industrially produced meat involves breeding animals, and injecting them with hormones so they put on as much meat as possible in the shortest time. But other meat farming methods, including free-range, nomadic, and those of small-scale farmers, are different and usually have much less impact on the environment.

Nevertheless, we are each still responsible for our actions, and for making conscientious decisions. Interestingly, there is a link between what is healthy for humans and for the planet. An imbalanced diet containing too much red and processed meat is responsible for a large proportion of our health problems.