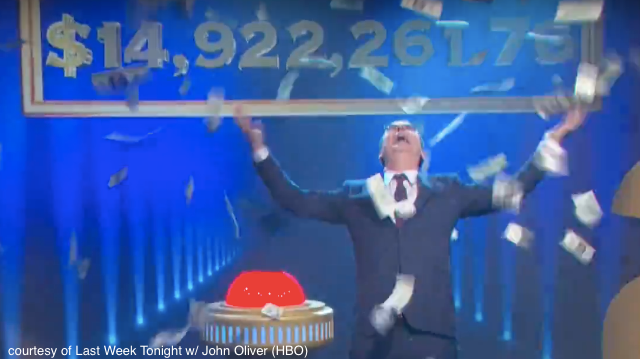 Comedian John Oliver has brought renewed attention to the nationwide debt crisis, but he isn’t the only one who can help people struggling with debt.

For anyone who didn’t see it, on Sunday night’s episode of HBO’s Last Week Tonight, Oliver announced he had purchased and forgiven nearly $15 million in medical debt. The huge give away came at the end of a segment where the comedian tackled one of America’s most controversial industries – debt collection.

Critics of the industry have long complained debt collectors face little oversight, and Oliver himself said breaking into the business was “disturbingly easy”.

“Debt-buying is a grimy business and badly needs more oversight, because as it stands any idiot can get into it. And I can prove that to you because I am an idiot, and we started a debt buying company,” he said.

Oliver’s program forked out around $50 to register a debt acquisition firm. The comedian’s brand new company quickly amassed a portfolio of just under $15 million in medical debt, belonging to close to 9000 people. That means that almost overnight, a television comedian gained the power to ruin the lives of thousands of people. In what is already being hailed as the largest on-air give away in US television history, Oliver forgave every cent, freeing thousands of Americans from potentially crippling debt. Check out the full segment below.

Medical debt is the single largest cause of bankruptcy nationwide. Even more disturbingly, a recent Harvard University study found over 70 percent of Americans who file for bankruptcy due to medical bills had insurance. Anyone can be affected by medical debt, and as it turns out, anyone can help. In fact, for years, anti-debt activists have been doing exactly what Oliver did Sunday night.

In late 2014, nearly 3000 college students woke up one morning to find their education debt had been paid off by the Rolling Jubilee Fund. The fund is a project of Strike Debt, which in turn was founded by a group of Occupy Wall Street activists. Since then, Rolling Jubilee has purchased and forgiven nearly US$15 million in debt. Unlike Oliver, who has the backing of HBO, Rolling Jubilee relies entirely on voluntary donations to purchase debt. These activists aren’t the only ones saving people from debt.

In July 2014 former debt collectors Jerry Ashton and Craig Antico formed RIP Medical Debt, an organization that aims to abolish $1 billion in debt. It was their organization that partnered with Last Week Tonight to create Sunday’s segment.

The organization has argued that just as it’s all too easy for anyone to fall victim to debt, it’s also easy to save others from bankruptcy.

“That threat is a mountain of unpaid, and unpayable personal medical debt. Don’t believe for one moment that this is not a serious cause,” they said.

According to the organization, “One in three Americans families is faced with skyrocketing medical bills.”

In another statement, RIP Medical Debt said, “Each donated dollar can pay off up to $100 of medical debt! A $50 donation can relieve a $5000 burden.”

It may initially seem baffling that one person’s pocket change can be used to save another person’s life savings. For example, Rolling Jubilee’s $15 million in debt purchases were made with just US $400,000 in donations.

“In reality, that debt is worth significantly less. The 1 percent is selling it to each other at bargain-based prices,” he said.

As Oliver explained in his segment, the reason is because debt is constantly being bought and sold.

“Let’s say you have a $1000 credit card debt that you can’t pay. At a certain point, your bank might write off the full $1000 on its taxes, and then to make just a little extra money, sell it off to a debt buyer for a tiny fraction of the cost – maybe $50,” he said.

Oliver continued, “If it can’t collect, potentially it can then resell that debt for a fraction of what it paid to someone else who can still come after you for the original amount.”

This means when the debtor gets a call regarding their credit card debt; it’s probably not their bank on the other end of the line. Rather, it could be any number of debt collection agencies.

According to credit adviser Clearpoint, debt less than three years old is commonly traded between agencies for less than 8 cents on the dollar. When that debt has been outstanding for six to 15 years, the price drops to around two cents on the dollar. At this rate, a debt of $10,000 can be purchased for as little as $200 – but that’s just the beginning.

“If you’re wondering, debts older than fifteen years were sold for next to nothing,” Clearpoint stated on their website.

As Clearpoint explained, the good news for individuals is the older the debt gets, the easier it should be to negotiate with collectors.

“Because the debt buyer paid so little for your debt, it will likely make a significant profit even if it compromises and negotiates with you,” they explained.

This same mechanism is also the reason why everyone from Oliver to Rolling Jubilee can so easily purchase huge amounts of debt for almost nothing.

Today, an estimated one in seven Americans is being hunted by a debt collector, according to Rolling Jubilee. Over 77 percent of households are in debt, and nationwide tuition debt alone is now worth more than US$1 trillion. To put that in perspective, the nation’s tuition debt is worth roughly as much as the entire GDP of Australia.

The only question is, if it’s so easy for anyone to save others from debt, why isn’t everyone lending a hand?