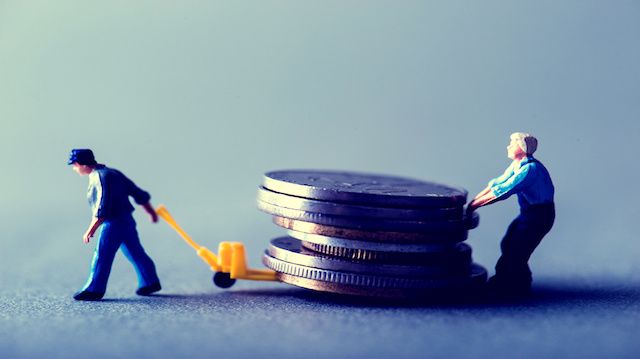 As the gap between the most wealthy and poorest Americans continues to grow, calls to raise the minimum wage have grown louder.

Legislation to raise the federal minimum wage from the current $7.25 is stalled in Congress, leading some states and cities to take matters into their own hands. New York has become the latest to increase its minimum wage to $15 per hour. Gov. Andrew Cuomo signed legislation on April 1.

“We believe that people who work hard should be able to earn a decent living and support a family with dignity,” Cuomo said.

A $15 minimum wage doesn’t eliminate the wealth gap between the wealthiest 1 percent and the rest of the country. But it certainly helps to make living a little more easier for the average American. In fact, a study by Berkeley College estimated that increasing the minimum wage to even $10.10 an hour would lift 4.6 million people out of poverty. That’s the equivalent of the entire population of Louisiana.

Of course, raising the minimum wage is a sensitive political topic and only a handful of states and cities have approved an increase. There are other changes Americans can lobby for that would also help to decrease the wealth gap. Here are just a few of them:

The Earned Income Tax Credit (EITC) is a benefit for working Americans with low to moderate incomes. To qualify, you must meet those income requirements plus be working for someone or running your own business. The benefits you receive depend on your marital status and the number of children you have but the research is clear: It is effective in lifting Americans out of poverty.

According to Berkeley College, the credit lifts about 4.7 million children above the poverty line annually. Expanding the credit has broad support, too. A survey of 1,000 members of the American Economic Association in 2000 found that more than 75 percent of economists agree that expanding the EITC would be a good idea. Of course, it is not without its risks. A report in The Atlantic found that the EITC reduced revenue to the federal government by about $70 billion in 2015.

A recent study from the Institute for Justice found that 102 low and middle-income professions require occupational licenses in order to be hired. These licenses require, on average, nine months of education, $200 in fees and at least one test. That’s not the kind of time or money the average American can spend if they want a quality job. Lobbying for the elimination or at the very least relaxation of these rules would allow Americans access to well-paying jobs that would normally be out of their reach.

At first glance this idea wouldn’t seem to have a big impact on income inequality. After all, how does the quality of a child’s pre-school help with the growing wage gap? As it turns out, it can have a big impact.

As The Washington Post wrote, a major cause of income inequality is a lack of opportunity and that arises from substandard education. James Heckman, a Nobel-winning economist, argued that by investing in early childhood education, children will have access to cognitive, arithmetic and reading skills which are all necessary to obtain high-quality jobs. Heckman’s analysis of the Perry Preschool project found that there was a 7 percent to 10 percent return on investment based on increased school and career achievement, as well as reduced costs in remedial education. Additionally, analysts of the Chicago Child–Parent Center study estimated there would be $48,000 in benefits to the public per child from a half-day of public preschool for at-risk children.

While your city or state waits for an increase to its minimum wage, the above methods are worth bringing up to your local representatives. They may not be as immediately felt as a $15 minimum wage, but they do have the potential to help solve our income inequality problem.