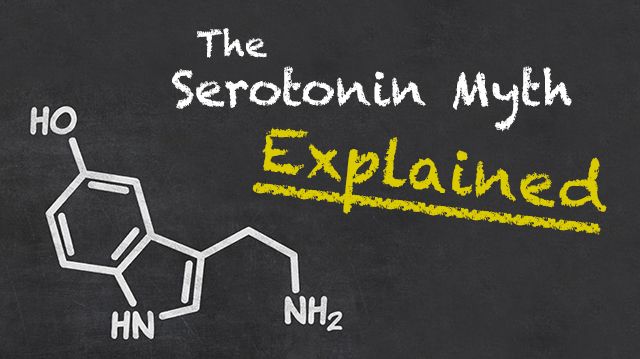 We’ve been made to believe that a chemical imbalance in the brain, specifically serotonin, can be fixed by popping a pill, mainly because the pharmaceutical industry tells us so.

We’ve all seen those commercials for antidepressants, followed by a long list of side effects. So, what happens when we allow “big pharma” to dictate science? For one, the medical profession continues to endorse the product — even when the science behind it is vague at best.

Depression affects approximately 350 million people worldwide, according to the World Health Organization. Depression can lead to poor quality of life, increased risk of heart disease and, in extreme cases, suicide. A shortfall of serotonin is primarily to blame, touts the pharmaceutical industry and some health-care professionals. The problem with that theory: serotonin linked to depression is not scientifically credible.

While much of the general population seems to accept the chemical imbalance hypothesis, the truth is, there just isn’t enough concrete evidence to back that theory. In the past few years some leading psychiatrists have been trying to distance themselves from the chemical imbalance theory of depression, because the evidence to support it has simply never been there, suggests Dr. Joanna Moncrieff in her blog post, “The Chemical Imbalance Theory of Depression: still promoted but still unfounded.”

Antidepressants are dispensed to fix a chemical imbalance, particularly a lack of serotonin in the brain. While their supposed effectiveness links to the chemical imbalance theory, the fact is, published data and the unpublished data hidden by drug companies reveal that most (if not all) of the benefits are due to the placebo effect, according to psychotherapist Irving Kirsch of Harvard Medical School, author of the study, “Antidepressants and the Placebo Effect.”

In 1998, researchers Kirsch and Guy Sapirstein searched studies in which depressed patients were randomized to receive a dummy pill or no treatment at all. What they noticed was that the studies also included responses to antidepressants. Surprisingly, they found that even dummy pills had an effect on depression. It seems that 75 percent of participants who were given a placebo with no active ingredient, had the same mental health improvement as those administered with the antidepressant drugs. Naturally, the findings were extremely controversial.

In an effort to respond to critics, the study was replicated in 2008 with a different set of clinical trials. The Freedom of Information Act was invoked to request data from the Food and Drug Administration (FDA). The study looked at six new-generation antidepressants, which represented the bulk of antidepressants prescribed during that period.

Only the drug companies and the FDA knew the results of the unpublished trials. Most of the trials failed to find any significant benefit of taking the drug versus the placebo. The data indicated that only 43 percent of the trials actually showed a significant benefit of taking the drug. The remaining 57 percent were failed or negative trials. What this means is that 89 percent of depressed people are not benefitting from their prescribed antidepressants, which lends credibility to the serotonin myth.

Some antidepressants increase serotonin levels, others decrease it and again others have no effect at all on serotonin. Yet, according to pharmaceutical trials they all show the same therapeutic benefits. Instead of curing depression, popular antidepressants may actually make you more likely to become depressed in the future, suggests Kirsch.

In 2008, a now famous study published in the New England Journal of Medicine by Turner et al sought to expose data manipulation, similarly to the placebo study of 1998 and later review in 2008.

So, how are medications that show poorly in trials approved by the FDA? Well, the FDA requires two clinical trials to effectively show a significant difference between drug and placebo. But there is no limit to the number of trials that may be conducted to find two significant trials. Any trials showing negative results don’t count. What’s more, the clinical significance of the findings don’t matter. All that matters is that the clinical results are statistically significant.

The myth perpetuated by “big pharma” that antidepressants are the cure for the “serotonin blues” really doesn’t hold water. It also conveys the message that we are powerless to change our situations or ourselves. When we’re feeling down, a pill will make things right. For some, a pill is the perfect solution, and we all have the freedom to do as we choose — that’s between you and your doctor. But for others trying to decide whether or not to take an antidepressant, it’s important to understand there’s not a lot of evidence that supports the serotonin myth.