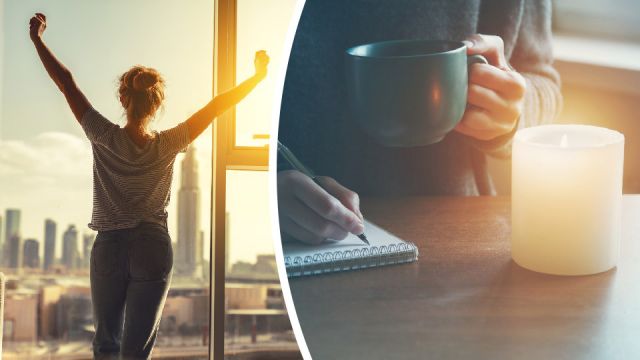 “Opportunities don’t happen. You create them,” says photographer Chris Grosser. That proactive attitude often separates highly successful people from those of us who are forever falling short of our dreams.

Yes, luck is sometimes a factor in who rises to the top. But in the vast majority of cases, thought leaders, pioneering entrepreneurs and the mavericks who change the world happen to share a number of factors in common. Invariably, an early-morning routine is key to their high-achievement. Here are a number of rules that the “best and the brightest” seem to apply consistently:

The importance of being an early riser

Waking up early is one of the most frequent characteristics highly successful people share. Undoubtedly, there are some very creative night owls too, but rising several hours before the workday begins gives high-achievers the quality time they seem to thrive on. As motivational author Tom Corley explains, “Getting up at five in the morning to tackle the top three things you want to accomplish in your day allows you to regain control of your life. It gives you a sense of confidence that you, indeed, direct your life.”

To become a high-achiever, study the morning routines of these successful people:

One of the most famous people with a morning routine is Oprah Winfrey. The famed talk show hostess, author and actress has built a media empire that’s worth close to $3 billion. But she likes to start her day before the sun comes up by offering herself up to something larger than herself. She does this by creating a sacred space that includes lighted candles, inspirational pictures and daily words (like “love life”) that she can focus on before she goes out into the world. You can see Oprah describe her early-morning habits for yourself in this cool video:

Most people have pretty demanding jobs with hefty responsibilities. But few of us can say that the fate of the world depends on us. Imagine, then, the physical stamina and mental toughness you need to have in order to be a world leader like the president of the United States.

The 44th president, Barack Obama, had a simple morning regimen that he used every day to prepare him for the rigors of his office. According to his aides, Obama liked to wake up two hours before he needed to. Starting the day at 5 a.m. allowed him to fit in 45-minutes of exercise that included equal amounts of a cardio workout and strength conditioning.

Obama also famously skipped coffee in favor of orange juice, water or green tea. Although caffeine has many health benefits, he felt that consuming low-caffeine or non-caffeinated beverages helped keep him hydrated, which left him fresher throughout the day.

Not sweating the small stuff was another part of Obama’s morning routine. He explained his rationale for minimizing attention to inessential matters by saying, “I’m trying to pare down decisions. I don’t want to make decisions about what I’m eating or wearing. Because I have too many other decisions to make.”

Tim Ferriss is a best-selling author, podcast host and a student of the tools, habits and techniques highly successful people use to stay disciplined. Over the years, he’s interviewed hundreds of high-achievers about their morning routines. As you’d expect, he’s incorporated many of the lessons he’s picked up into own life too.

Ferriss begins his day by borrowing a page from Admiral William McRaven, who emphasizes the importance of starting each day with a simple task. As the Naval leader explains, “If you make your bed every morning, you will have accomplished the first task of the day. It will give you a small sense of pride, and it will encourage you to do another task and another and another.”

Ferriss also stresses the importance of morning mindfulness. By devoting 20 minutes to meditation, Ferriss believes he’s honing mental skills that allow him to approach the world more flexibly and creatively. As he explains, “So meditation, or mindfulness practice, it’s really about, to me, decreasing emotional reactivity so you can proactively create your day and create your life; versus, just being a walking reflex that sometimes screws up.”

Following that, Ferriss likes to fit in these activities before he really gets going:

Richard Branson is one of the world’s most iconic entrepreneurs. In addition to founding Virgin Atlantic, one of the UK’s leading airlines, Branson also is responsible for Virgin Galactic, a spaceflight company that aims to be one of the first private ventures to make commercial space travel a reality.

Like many high-performers, Branson believes in getting up early and exercising. As he explains, “No matter where I am in the world, I try to routinely wake up at around 5 am. By rising early, I’m able to do some exercise and spend time with my family, which puts me in a great mind frame before getting down to business.”

Kitesurfing, swimming and tennis are among Branson’s favorite early morning activities. In Branson’s words, “being fit and healthy, there’s nothing like the endorphins from being fit, and the incredible endorphin rush that goes with that.”

You may have noticed that five factors keep popping up in the lives of the super successful. They’re not exactly a secret, but most people either fail to appreciate them or apply them. Here are the key ingredients that ultra-achievers employ.

The morning is when most people will be at their freshest, most creative and energetic. There will also be fewer distractions while everyone else is sleeping. Use this portion of the day to be proactive and productive.

Getting your blood pumping early will oxygenate your brain and help boost your cognitive powers, metabolism and energy resources throughout the day.

Meditation, prayer and journal writing can help calm your mind so that you can respond more creatively and imaginatively to events later in the day.

Fiber and nutrient-rich foods will provide a steady supply of energy throughout the day. Stay away from sugary and processed foods so that you can avoid blood-glucose spikes that cause feelings of mental and physical fatigue.

5. Set aside the small stuff

Zero in on your larger agenda. Use the morning to identify your dreams and map out your most important goals. This should be your “big picture” time where you focus on whether the objectives reflect the core of your being.

Remember this quote from Steve Jobs, “If today were the last day of my life, would I want to do what I’m about to do today?”