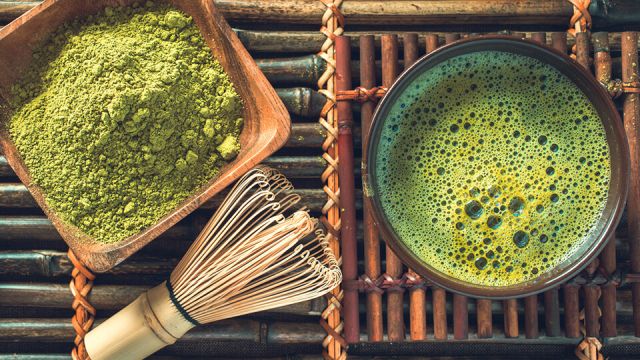 By now you’re probably aware of the health benefits derived from drinking green tea. Perhaps you’ve even made the switch from coffee for your caffeine fix, or you appreciate green tea’s ability to reduce inflammation and lower your risk of certain cancers. From helping to aid in weight loss to protecting your joints, this ancient Asian beverage deserves a place in your diet. However, there is a powerful, even more potent derivative that, up until recently, was not even considered — and that is matcha.

Interestingly, matcha is green tea. It’s made from the leaves of the Camellia sinensis plant that are finely ground into a powder and mixed into a liquid, rather than traditional leaves which are steeped in water and then discarded. Matcha has its place in Asian culture as the preferred beverage for warriors and monks alike due to its energizing and focus-driven properties.

Unlike traditional green tea leaves, matcha is found in three grades: koicha, usucha and culinary matcha. Matcha undergoes a unique growing process whereby the tea plants are covered with shade cloths in the final weeks before harvest to restrict photosynthesis and increase the levels of chlorophyll and L-Theanine — an amino acid that promotes the production of alpha waves in the brain.

From there, the leaves are harvested, briefly steamed to prevent fermentation, then dried and aged in a cold storage before being stone-ground into a fine powder. It is a costly, time-consuming process, which may partly explain why matcha was originally reserved for tea ceremonies by the Far East elite. Thankfully, due to a swell in popularity in recent years, everyone from Whole Foods to Starbucks has gone mad for matcha, making it more readily available. Here’s what you should know about this ancient superfood.

Matcha is really good for you

One of the biggest draws for matcha, much like its counterpart green tea, is the high levels of antioxidants. And, because one ingests whole leaves when drinking matcha, as opposed to a steeped beverage, you immediately receive a more potent source of nutrients. Matcha boasts one of the highest OARC values (Oxygen Radical Absorbing Capacity) of any food, second only to ground cloves. OARC measures the number of units of active antioxidant ingredients found in food to help fight against free radicals associated with increased risks of cardiovascular disease and cancer, among other illnesses.

Arguably matcha’s most powerful antioxidant is the polyphenol EGCg, which not only boosts the body’s metabolism but can work to stop the growth of cancerous cells. There are 61 milligrams of EGCg found in every gram of matcha. That’s 100 times more than any other tea on the market.

Matcha can energize you without the jitters

Anyone who’s ever had one-too-many cups of coffee can attest to the truly awful feeling of having the jitters. Matcha can be a great substitute for those looking to take a break from their daily latte but still crave a kickstart from caffeine.

Matcha contains roughly half the amount of caffeine found in espresso (approximately 34 milligrams compared to 60 milligrams, respectively). However, when the caffeine molecules in matcha bond to larger antioxidant molecules, including catechin, they work together as a time-release allowing for a longer period of being caffeinated (usually three to five hours), instead of all at once, like coffee.

This allows for the effects to be felt at a smoother, more enjoyable level with less chance of a “crash” later on. Because matcha’s effects can be felt hours after consumption, it is important not to drink before bed.

Matcha may make you feel good

Matcha wasn’t just originally intended for tea ceremonies — Japanese Monks and Chinese Daoists are known for drinking matcha to aid in relaxation during long meditations. This is believed to be a result of the antioxidant L-Theanine and its production of alpha waves.

Alpha waves are present when the brain is in a relaxed yet focused state, similar to a daydream or mindful meditation, and can also be produced during physical exercise. A 2015 study conducted by neuroscientists at Brown University examined how achieving a “mindful state” through alpha waves may help sufferers of chronic pain and anxiety. L-Theanine is also linked to the production of the brain’s “feel good” chemicals, dopamine and serotonin — both of which are linked to enhanced mood, memory and concentration.

Matcha can help you detox and lose weight

Because the green tea leaves are covered with shade during the final weeks before harvest, the abundance of chlorophyll that develops is responsible for matcha’s vibrant, rich shade of green and its unique cleansing capabilities. Chlorophyll is known as the lifeblood of plants. Its antioxidant properties allow it to bind to toxins and heavy metals in the body for easier disposal.

Green tea, especially matcha, can also help to rev up your metabolism and allow the body to burn fat up to four times faster than average without increasing blood pressure or heart rate.

There are so many ways to use matcha

The beauty of matcha, compared to “regular” green tea, is that there are so many ways to enjoy it! Matcha is delicious when served both hot or iced. It can be mixed into yogurt, smoothies or even baked goods — the options are almost as endless as its health benefits!