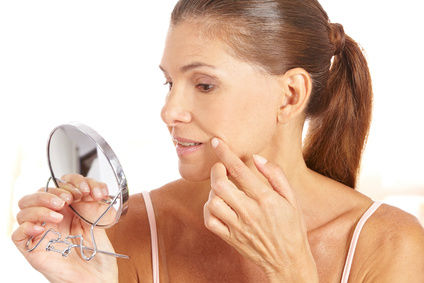 Age spots are skin discolorations found generally on the face, neck or back of the hands. Though no two spots are alike, they’re generally flat in shape and can range in colors from brown or gray to even a deeper shade of black in some people.

They’re called “liver spots” by some, as holistic practitioners believe an over-abundance of toxins in the liver or kidneys are a direct cause. Because they usually start popping up in the 40-plus age bracket, they’ve adopted their most common name, “age spots.”

From a scientific standpoint, the spots appear in areas of concentrated melanin production. Melanin is responsible for producing skin’s pigment. Excessive UV exposure can stimulate the overproduction of melanin and the simple process of aging usually contributes to excessive melanin-production as well. Combine years in the sun and the wear and tear of aging and you’ve got a recipe for age spots.

Dermatologists will often point patients toward the medical route when it comes to treating age spots. A dermabrasion procedure will essentially sand your skin down to allow for new spot-free growth or you can opt to burn the top layer of skin off with acid with a chemical peel. Both procedures are as painful as they sound.

And if sanding and burning your skin off doesn’t sound like your cup of tea, you can opt for controversial bleaching creams. Just be careful as one chemical often found in these creams, hydroquinone, comes with side-effects dangerous enough that the FDA has been fighting to ban it in the US since 2006. It’s already banned in both England and France.

If your age spots don’t bother you enough to undergo painful treatments or apply potentially dangerous chemicals to them, there are several natural routes you can go:

Detox. In ancient Chinese medicine, skin spots appear when there is an imbalance somewhere in the body. The best remedy is to eliminate processed foods and eat a diet rich in organic produce. And don’t forget to drink plenty of water as toxin build-up in both the kidneys and liver is believed to be a contributor.

Supplement Smart. Potassium deficiency often correlates with the appearance of age spots over time. Potassium-rich foods include bananas, cantaloupe, avocado, dates and figs to name a few. Both vitamins C and E are antioxidants associated with skin tissue repair and beta-carotene is known to slow the aging process. These supplements are often found in a multi-vitamin but can be purchased separately.

Topical Treatments. There are several natural topical treatments you can make from ingredients found right in your pantry including:

While you can’t avoid aging, you can take care of your body as you age. Eat a primarily organic diet, avoid processed foods and sugar-sweetened beverages, get plenty of exercise and avoid long hours of sun-exposure.