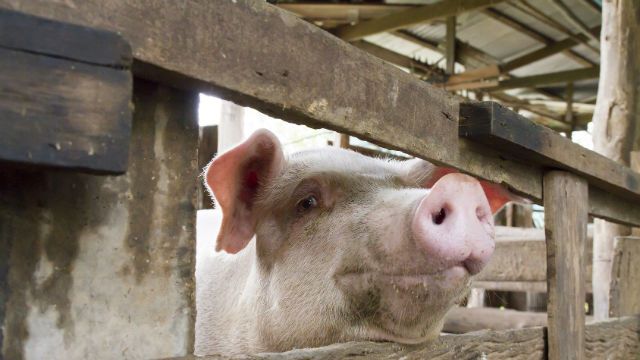 Since first being detected on an Ohio farm a little over a year ago, a killer virus known as PEDv (Porcine Epidemic Diarrhea) has been spreading throughout pig farms in the US, resulting in more than 10 percent of our nation’s pigs to perish.

This highly contagious disease has affected pigs in 30 states as well as Canada, attacking the animals’ small intestines, which makes it impossible for them to absorb vital nutrients or water. Young pigs are said to be the most vulnerable, with the virus 100 percent fatal in piglets under three weeks old.

The virus, at least in part, is said to be traced back to pig’s blood that is used in piglet feed. Dried blood plasma is a relatively new ingredient in pig feed, used to boost the pig’s immune system, enhance growth and feed intake shortly after weaning.

The dried blood plasma is made by collecting and processing blood from a number of large hog slaughter plants throughout the country, which means the pigs are being fed back parts of pig – a rather macabre thought.

All of the mixing and cross-contamination means that pathogens are allowed to contaminate huge amounts of food products, which is why so many animals are affected across multiple states, despite the fact that there is no direct contact between affected farms.

While the virus poses no threat to humans, the entire industry is creating a huge problem. The agricultural overuse of antibiotics has caused a wide range of pathogens to become immune to these medications. It also causes an increase in the mutation of pathogens into even more destructive strains.

In addition to the overuse of antibiotics, which is now posing a major threat to human health, confined animal feeding operations (CAFOs) are known to promote diseases that don’t occur in the organic model, due to unnatural diets.

Using things like pig plasma in feed is a practice that has a bad history; think about mad cow disease for one example. One of the main ways that disease is transmitted is when cows are fed feed that’s made of bone meal and waste products from other cattle who are infected with the disease. Because of this, it’s now illegal to feed beef-based products to cows.

Unfortunately, factory farms found a way to get around the law by using a feed product called “chicken litter,” which is a rendered-down mix of chicken manure, dead chickens and feathers, and nearly one-third spilled chicken feed, which includes cow meat and bone meal used to feed the chickens. Quite possibly because of this, mad cow disease reared its ugly head once again, with a Texas man recently dying from it.

Director of public health and animal agriculture for the Humane Society of the United States, Dr. Michael Greger, says more than 30 new human pathogens have been discovered in the last three decades, and many of those originated from animals on farms, like the deadly PEDv, and it threatens us all.

Greger underscores the bottom line, noting: “Factory farms represent the most significant change in the lives of animals in 10,000 years. This is not how animals were supposed to live.”

If you eat meat, to ensure your good health and the health of your family, organic, grass-fed meats that are humanely raised are really the only type of meat you should ever purchase.