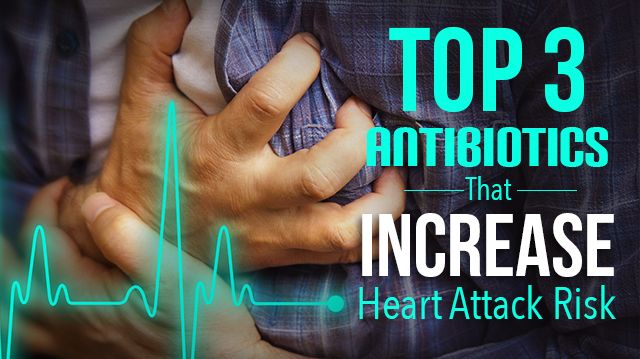 Certain antibiotics used to treat pneumonia, bronchitis and bacterial infections may increase the risk of heart attack, but only for people with underlying heart disease such as arrhythmias, structural changes to the heart, or heart damage from a previous heart attack. Read on to find out which three antibiotics pose the highest risk.

Macrolides are the most commonly prescribed antibiotics, and are used to treat a number of bacterial infections. Under the umbrella of macrolides are the commonly prescribed antibiotics azithromycin, erythromycin and clarithromycin. Research published in the New England Journal of Medicine studied more than a million cases of antibiotic-treated patients in 2012, and discovered some scary findings.

The study found that patients taking azithromycin for five days were three times more likely to suffer a fatal cardiovascular event, compared with patients who took no antibiotics. Azithromycin, it seems, also caused irregular heartbeats in some patients. Similarly, erythromycin and clarithromycin were found to be linked to an increased risk of sudden cardiac death, according to the study.

This time researchers examined each macrolide separately: azithromycin, clarithromycin and erythromycin. In this analysis, researchers found that each antibiotic was linked to an increased risk of sudden cardiac death or ventricular tachyarrhythmia (rapid heartbeat).

“Given that macrolides are one of the most commonly used antibiotic groups and millions of patients are prescribed these drugs annually, the total number of sudden cardiac deaths or ventricular tachyarrhythmias and cardiac deaths may not be negligible,” said Su-Hua Wu, M.D., Ph.D., one of the study authors. “The heart safety of each macrolide needs to be better understood, to help guide clinical treatment decisions.”

In response to the study published in the New England Journal of Medicine, the US Food and Drug Administration (FDA) made a statement declaring they were aware of the cardiovascular deaths associated with azithromycin, in comparison to persons treated with amoxicillin, ciprofloxacin or no drug.

On March 3, 2013, the FDA made a follow-up announcement with a warning to the public that azithromycin can cause abnormal changes in the electrical activity of the heart, which may lead to a potentially fatal irregular heart rhythm.

“Health care professionals should consider the risk of fatal heart rhythms with azithromycin when considering treatment options for patients who are already at risk for cardiovascular events,” said the FDA.

Azithromycin is commonly prescribed to battle bacterial infections like pneumonia, bronchitis and sexually transmitted diseases, and marketed under the brand names Zithromax, Zmax and a treatment course commonly referred to as a “Z pack.”

Under adverse reactions listed in the FDA drug label, erythromycin — commonly prescribed for bacterial infections such as bronchitis, whooping cough, pneumonia and dental surgery — has been associated with a risk factor for sudden death and abnormal heart rhythms including rapid heartbeat.

In 2011, approximately 40 million people in the United States were prescribed azithromycin, according to the FDA.

“This possibility should give clinicians pause when they’re considering prescribing antibacterial drugs, especially for patients with preexisting cardiovascular risk factors, or clinical conditions in which antibacterial drug therapy has limited benefits,” said the FDA.

While some drug labels have been updated to strengthen the warnings and precautions, it’s still important to recognize that macrolide antibiotics can cause death in people with underlying heart problems. And while this may make a lot of people nervous, the new findings help doctors determine who has an increased risk for heart problems when taking macrolide antibiotics. Discuss your antibiotic treatment with your doctor and make sure they are aware of your medical history and any drugs you are taking.