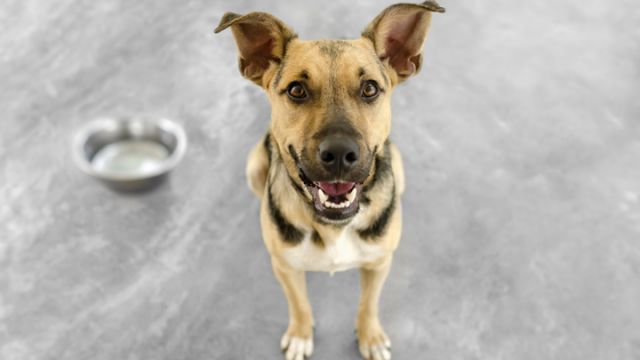 Your high-energy dog devours his meal in seconds. He’s then off to find some other way to unload all that vitality – and it’s likely to cause havoc.

One simple way to channel that energy and cure his boredom is banning the bowl and feeding him from a food enrichment device. It can take your dog up to a half hour – 30 full minutes – to consume his meal and have fun in the process. Even better, he’ll likely feel tired when finished.

A food dispensing device isn’t the same as a treat-stuffed toy, although your dog may also benefit from them. Treat dispensers usually require peanut butter or some other gooey food to plug the holes and encourage activity to get the treats within, and they are difficult to clean. A food dispensing device uses kibble, not canned food. There’s plenty of room in it for the dog’s meal. If you want to feed your pet some wet food, it will have to go in a dish. It’s probably best to feed the wet food first, as it takes just seconds to devour, and then give your dog the food dispenser to keep him occupied.

Food dispensing devices aren’t merely a way for your dog to work off energy. They have cognitive benefits, as the animal figures out the best ways to get his food. That’s why it’s referred to as an enrichment device, sort of a brainer teaser for canines.

Those cute puppies are often turned into animal shelters when they’re the canine equivalent of teenagers – nine to 18 months of age – and their owners just can’t deal with their boundless energy. There’s probably no place as frightening – and boring – for any dog as a shelter. There’s not only the constant cacophony of other dogs, but there’s nothing to do. Maybe a volunteer will take a dog for an occasional walk, but it’s mostly living in a cage or concrete pen and waiting for someone – anyone – to pay attention. Such dogs frequently develop stereotypic behaviors, such as pacing and spinning. Many shelters don’t provide chew toys for dogs, because swallowed pieces can end up causing serious intestinal issues. Chewed-up bits can also block the drain necessary to get rid of urine and waste.

Shelter operators found that providing standard shelter kibble in an inexpensive PVC food dispenser gave anxious dogs something to do, twice a day. Making and filling the devices was an ideal task for volunteers.

Because the dogs had an outlet twice daily to use their brains, they were less bored and somewhat calmer. Dogs were less likely to develop stereotypic behaviors, and generally just looked more appealing. They were easier for volunteers to walk, with less leash chewing and pulling. Bored dogs in shelters often display bloodshot eyes, heavy panting and reddened mouths, all due to the stress of living in a cage or pen with minimal attention. When they receive food enrichment devices, they are less likely to appear so stressed, making them more attractive to potential adopters. Better behavior and a pleasing look increase the odds of dogs finding a new home.

The difference was most apparent in the types of dogs with high oral needs – pitbull and retriever types. These are also the types of canines most often found in U.S. shelters. Some shelters give adopters a food dispenser device to make a high energy dog’s transition to a new home flow more smoothly.

Simply drill one or two holes in the pipe somewhat larger than a piece of kibble. Put a cap on one end and fill the device with kibble. Put the other cap on and give it to the dog. It will take far less time for you to make a food dispenser then it will for your dog to finish eating his meal with it.

Cleaning the food dispensers is easy. Simply rinse them out or use a scrub brush to get rid of any detritus.

There’s an additional benefit for you, besides an opportunity for your dog to work off some of his energy. Watching him use his food dispensing device is a lot of fun. Add it to the list of other “devices” you might use for entertainment.