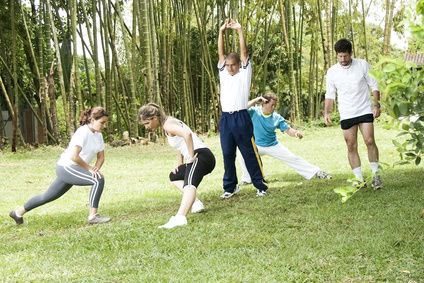 If you’re looking for motivation, a study out of Michigan State University found that exercising with a partner can improve performance as well as the duration of the workout by as much as 100 percent. Having a workout partner may make the difference between success and failure when it comes to achieving your overall fitness goals.

The time goes by faster because it’s more fun

Working out with a friend or family member often makes the time go by much quicker. When exercising alone, many people tend to watch the clock, which makes the time seem to drag by.

By taking part in physical activity with someone else you can pass the time chatting or laughing, which also gives you something to look forward to at your next workout together. Even a serious workout can still be fun. In fact, the more fun that it is, the more likely you’ll both stay committed over the long term.

You’ll be less likely to cancel

If you only have you to answer to yourself, it’s a lot easier to talk yourself out of a workout, especially when you have a busy day or you’re feeling tired. Remember that one missed workout can easily become two, then three, and before you know it you’ve lost the habit. You’ll also find that you’ll lose much of the endurance you’ve worked so hard to build. If a workout partner is counting on you to be there, you’ll be much less likely to cancel.

It’s easier to try something new

If you have someone with you, it’s a lot less intimidating to try something new, whether it’s a new class like yoga or Crossfit, using new exercise equipment, or joining a new gym, having a workout buddy with you will help make it that much easier to expand your horizons and become even fitter.

A little competition can be a good thing as it will usually help you to perform better. A study out of Kansas State University found that those who exercised with a partner they perceived to be better increased their workout time and intensity by as much as 200 percent.

Where to find a workout partner

What do you do if you don’t have a workout partner? If you’re married or have a significant other, consider exercising together. This is especially convenient as you don’t have to worry about each of you having to drive to the gym or having to carpool as you’re already together. It can also positively impact your relationship. A few ideas including biking or jogging, hiking, or even doing calisthenics or dancing at home.

Participating in recreational sports is also a great way to keep active and healthy while spending time together. Co-ed sports leagues can usually been found in most cities and are often available to people of all abilities.

Other options for workout partners include co-workers, neighbors and friends. If there isn’t anyone you know who might make a good partner, consider heading to the Internet. Sites like Meetup.com, the world’s largest network for special interest groups, has everything from local hiking and walking groups to meet-ups for exercising with your pets and just about everything in between.