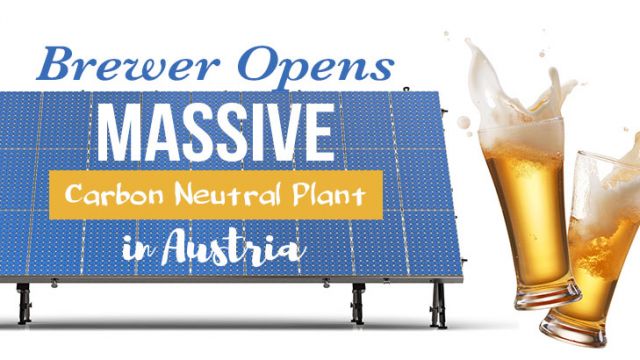 Heineken has cut the ribbon on its new Göss brewery, a facility in a mountain town in central Austria that’s designed to be super efficiently run on various forms of sustainable energy. The brewery has a legacy that dates back more than a century, when monks in a local monastery started churning out suds in 960. In time, the monks’ beer developed into one of Austria’s favorite brands.

In 2003, Heineken acquired a majority stake in the company that owned Gösser beer and soon afterward began to incorporate its signature renewable energy sources, including hydropower, solar and heat from biomass. The brand will continue to be distributed throughout Europe — but without a carbon footprint.

A Heineken official said Göss Brewery already was highly efficient and automated, but now it will be even more economically and environmentally viable.

“Not being dependent on energy sold on the open market protects the brewery from price fluctuations, and therefore saves money in the long-term,” said Michael Dickstein, director of global sustainable development at Heineken, in a statement.

“The combination of energy the brewery now runs on will provide it with energy for at least the next 15 years, which provides financial stability to the brewery.”

Before Göss Brewery disconnected from the local power grid, Heineken estimated that the carbon emissions from the 156-year-old brewery was more than 3,000 tons annually. The company claims its yearly emissions will be zero.

To eliminate emissions, Heineken launched a plan to include energy efficiency and renewables such as biogas generated from the beer maker’s grain fermentation tank and biomass from a nearby sawmill.

At least 5 percent of the natural brewery’s power is generated by a 16,000 square foot solar-powered rooftop plant.

Additionally, the brewery is moving toward what it calls a “closed-loop” system. Typically, grains used in the brewing process were given to local farms for animal feed, a standard industry practice. Instead of feeding the animals, those grains will be used to heat the plant’s boilers. The waste then goes to local barley farmers, who grow the grains that Heineken brews into more batches of Gösser beer.

Brewed by the sun

All of the brewery’s raw materials now come from within Austria, which also is part of Heineken’s commitment to reduce the company’s carbon emissions globally by 2020.

Heineken has announced plans to market four of its brands as “Brewed by the Sun.” Increasingly, customers demand products from companies that are environmentally friendly and working to reduce their carbon footprint.

Gösser and the Heineken brands Tiger, Birra Moretti Baffo D’Oro and Wieckse either already use the “Brewed by the Sun” label or will be using the brand within the next year. That is expected to trigger similar brand campaign launches by Heineken’s competitors and perhaps even more environmentally friendly, large-scale production facilities.