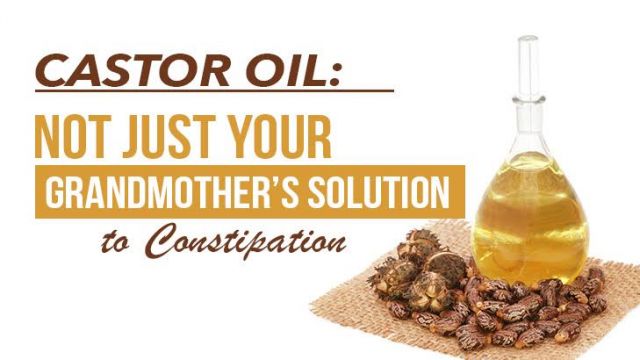 If you were ever forced to take a spoonful of castor oil as a child, you may shudder at the very mention of it. However, as unappetizing as it is to many people, castor oil does have its uses — even more than your grandmother may have imagined.

The most famous use of castor oil is taking a teaspoon to relieve constipation. If you’ve tried it, you probably know that it’s not a pleasant experience, it may come along with some nausea and diarrhea, but, in many cases… it works. You probably thanked grandma after the process was over for your gastrointestinal relief.

So, what exactly is castor oil? Short answer: a beneficial oil processed from a poison seed, with many potential health benefits.

That’s right, the seed of the Ricinus communis plant is poisonous, as it contains ricin, a dangerous and powerful toxin. However, when castor oil is properly extracted from the seeds, none of the ricin remains. Castor oil itself is deemed safe for internal use as a laxative by the FDA, in quantities of about one tablespoon for adults, and one teaspoon for children.

Once castor oil enters the small intestine, it is converted into ricinoleic acid, which stimulates and irritates the intestinal lining, thus causing a constipation-clearing digestive purge. This effect usually occurs about four to six hours after castor oil is consumed.

However, castor oil is more than just a constipation remedy. According to renowned health expert, Dr. Joseph Mercola:

“You are probably aware that castor oil is regarded by some as a remedy for constipation. But you may not be aware of its reported use as an antiviral, antibacterial, and antifungal, or that it has been used topically to treat a variety of skin conditions, reduce pain, and stimulate your immune system.”

These potential effects of castor oil stem from the combination of nutrients found within. The ricinoleic acid acts as an anti-inflammatory agent, and undecylenic acid works to help kill bacteria and microorganisms. Castor oil also contains a wealth of nutritious fatty acids (including linolenic acid), as well as vitamin E, which is vital to healthy skin.

Because of its vitamin E, fatty acids, and other compounds, castor oil can be great for the skin when applied externally. It may help with a variety of skin ailments, such as acne, itchy skin, and dermatitis. Additionally, it can be used in a home face treatment to help promote healthy, glowing skin.

Along with castor oil, the root of the castor plant has been found to have some significant health properties, as well. A 2006 study published in the Journal of Ethnopharmacology tested the anti-inflammatory actions of castor root on rat models. On their results, the study authors explained:

“The results of the study indicate that the methanolic extract of Ricinus communis root possess significant anti-inflammatory activity in acute and chronic inflammatory models in rats. The observed pharmacological activity may be due to the presence of phytochemicals like flavonoids, alkaloids and tannins present in the plant extract with various biological activities.”

Additionally, a 2008 study published in the journal Food and Chemical Toxicology tested the blood sugar lowering effects of a solution composed of 50 percent castor root extract on mice, including mice with models of type 1 diabetes. The study authors found:

“Administration of the effective dose of RCRE [Ricinus communis root extract] to the diabetic rats for 20 days showed favorable effects not only on fasting blood glucose, but also on total lipid profile and liver and kidney functions on 10th and 20th day…. R. communis seems to have a promising value for the development of a potent phytomedicine for diabetes.”

It certainly seems that once more research is done, the castor plant could play a significant role in the mitigation of many illnesses.

Even though castor oil has been used for centuries in a variety of home remedies, across many nations, it is not without its risks. The most common of these risks is digestive discomfort, including nausea and gastrointestinal pain.

Castor oil is not suitable for people with irritable bowel syndrome, ulcers, or hemorrhoids (to name a few conditions), or for individuals who have recently had surgery — unless your doctor says otherwise.

With both internal and topical applications, it is wise to speak to a health professional you trust before using castor oil, as it is so potent, and not a great deal of research has been performed on this oil and its uses. Always better to be safe than sorry, even if you’re just using castor oil as a laxative.

When choosing a castor oil, get a high quality variety from a source you trust. Many castor seeds are treated with pesticides and processed in harsh ways, and you obviously don’t want oil derived by these means in your body. Choose a reputable source, and find out how the seeds were raised, and how the oil was extracted.

Do you use castor oil? Please tell us about your experiences!