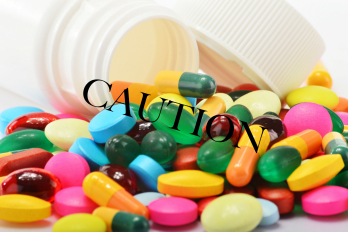 If you use any kind of supplement, whether it be a vitamin, weight loss aid, herb, or probiotic, we really can’t stress enough the importance of getting it from a trusted source. Because the FDA does not regulate these products, frightening instances of contamination can occur.

Signifying the latest of such incidents, the FDA issued a press release this past weekend warning consumers not to buy Oxy ELITE Pro Super Thermogenic, a popular weight loss supplement, due to contamination with fluoxetine, the drug sold under the popular brand name of Prozac.

In their press release, the FDA wrote:

“Uses of SSRIs have been associated with serious side effects including suicidal thinking, abnormal bleeding, and seizures. In patients on other medications for common conditions (aspirin, ibuprofen, or other drugs for depression, anxiety, bipolar illness, blood clots, chemotherapy, heart conditions, and psychosis), ventricular arrhythmia or sudden death can occur.”

On top of these serious potential effects, as we reported  back in 2013, researchers at the University of Wisconsin-Milwaukee have also found that Prozac, even just added to water in a one-part-per-billion concentration, potentially led to anxiety, aggression, and reduced reproduction in minnows. This concentration of Prozac was akin to the amount already found in some treated water, which is released into streams.

Currently, it is unknown how many people purchased Oxy ELITE Pro Super Thermogenic and have been unwittingly exposed to Prozac. The scary thing is, many people may have this product in their cabinets right now, people who have been taking it regularly not knowing they were ingesting this potentially deadly medication.

At the bottom of their press release, the FDA states, “FDA is unable to test and identify all products marketed as dietary supplements that have potentially harmful hidden ingredients. Consumers should exercise caution before purchasing any product in the above categories.”

This seems rather convenient, as there is no responsibility claimed by the FDA for this consumer danger. However, shouldn’t it be their job to make sure our food and drugs are safe? It does seem to be in their agency description, but the reality of the matter falls far short, as supplements are only inspected by the FDA if suspicious symptoms are reported, not before they are released onto shelves.

We’ve been growing increasingly frustrated – distraught, actually – with the failures of the FDA. As we very recently reported, a study published in JAMA has just found that not only does the FDA not test our products until damage has been done, they have also been shown to be covering up scientific fraud in studies used to decide the approval of our foods and medications!

As far as the FDA, they’re proven themselves to be entirely untrustworthy. As far as supplements, if you do use them, make sure to do your homework. Only buy from sources you trust, which answer your questions and release ingredient and source lists when you call, and have references of satisfied, healthy customers. For a place to start, you may wish to ask a natural health professional you trust for brand recommendations.

However, in the great majority of cases, there is no need to take a supplement for weight loss – you can get everything you need just from switching to a healthy lifestyle. No supplement can ever match the truly natural way.

UPDATE: A new update to this story urges us to be even more cautious when shopping for supplements. USPLabs, the makers of Oxy ELITE Pro, have issued a statement (seen below) noting that the supplement tested by the FDA was actually a counterfeit version of a product that is no longer in production. Here is what the company spokesperson Michael Petruzzello said:

“On Saturday, February 28, 2015, the Center for Drug Evaluation and Research (CDER) issued a Public Notification on the contamination of a dietary supplement product labeled as OxyElite Pro Super Thermogenic (referred to below as “OEP”) with a prescription drug active ingredient, fluoxetine. USPlabsimmediately conducted an investigation and determined that the product shown in the Public Notification and tested by FDA was not manufactured or distributed by or for the Company. It is a counterfeit.

The genuine OEP, made in capsules, uniformly had lot numbers beginning with the numeral “4”. The counterfeit product lot number of 216732 is therefore obviously fraudulent. The Company has verified that no OEP product (or other Company product) has ever had the lot number of 216732.

Neither USPlabs nor its contract manufacturers has ever ordered or in any way handled fluoxetine for any purpose of any kind.

The Company has encountered counterfeit versions of its dietary supplement products in the past, and has reported these problems to FDA as well as to State and other Federal officials.

Although USPlabs discontinued the manufacture and distribution of its products containing DMAA in October 2013, other companies did not. Numerous dietary supplement products containing DMAA are still available through the internet. The Department of Defense Human Performance Resource Center website lists 43 such products, and the National Medicines Comprehensive Database lists 313. A Brazilian website, as example, offers OEP for sale and that may well have been the source of the counterfeit product that FDA tested. The Supplement Facts for the counterfeit OEP product shown in the Brazilian website are not the same as the genuine USPlabsversion. And, in fact, online complaints about the Braziliancounterfeit OEP can be found identified by lot number 216732 and expiration date 04/17 — the same identifiers as the counterfeit tested by FDA.

USPlabs has offered to work with the FDA to help prevent the distribution of counterfeit versions of its dietary supplement products.”