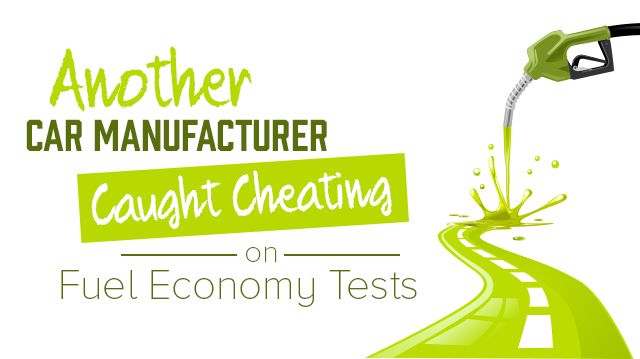 Since admitting last week to rigging fuel economy tests, Mitsubishi’s market value and Japanese orders have halved, though it will be able to weather the damage.

Mitsubishi said it manipulated mileage tests on four mini-vehicle models. However, these models aren’t being sold in the U.S., minimizing the damage for the company.

It’s not the first time Mitsubishi has been caught. Over the last decade it has also faced scandals involving hiding customer complaints and secret recalls, which led to the arrest of former executives. Not only that, but an internal investigation within the company has found the lies about mileage date back to 1991. Then, a few days ago the company admitted that actually it has been using an unapproved testing method to collect fuel-economy data on certain vehicles for 25 years.

It turns out the company used desktop calculations, rather than actual tests on vehicles, as required by Japanese law. That is, they basically made up the numbers.

Volkswagen was arguably even more cunning. The EPA found in September last year that VW cars were being sold in the U.S. with a software device in diesel engines that could detect when they were being tested, and that changed the performance data accordingly to improve results. VW confessed that about 11 million cars worldwide, including eight million in Europe, were fitted with the “defeat device”.

According to Reuters, analysts are predicting that Mitsubishi will have to pay close to $1 billion to compensate Japanese buyers of the mini-vehicles.

On top of that, after last week’s confessions, Mitsubishi is facing a slump in new car orders as well.  In the U.S, with the EPA’s power to fine a company up to $37,500 for each vehicle that breaches standards, coupled with other legal costs and general market losses, car manufacturers must surely be wondering if cheating on fuel economy tests is worth it.

Consumers and governmental policy is putting pressure on car makers to increase fuel economy – that is, the amount of fuel needed to travel a certain distance.

Car manufacturers are feeling the pressure to not only develop models with more efficient engines and lighter car bodies, but also to develop more electric vehicles.

The rules follow years of huge marches, campaigning and demands from environmentalists, activists, and advocates of fuel conservation. They also coincide with alarming climate statistics, with last month’s global temperatures the most abnormally warm on record, and 3 million people dying prematurely every year due to air pollution.

But after a year of incredibly low oil prices, the drive for efficiency has to come from people and policy, as saving money from lower gas expenses won’t be a huge incentive for the time being.

Meanwhile, a range of less expensive, all-electric cars are arriving on the market, putting pressure on the old style and less fuel-efficient, but still mainstream, gas and diesel alternatives.

Energy advisers said just last month that the impact of electric vehicles is being underestimated, and Bloomberg has noted how much the cost of electric cars has dropped recently, asserting that “the 2020s will be the decade of the electric car.”

Of course, for the most reliable fuel efficiency, nothing quite beats public transport and bikes. In the U.S, according to data from Oak Ridge National Laboratory, intercity rail wins at average per-passenger fuel economy. In passenger miles per gasoline-gallon equivalents (GGE) – where fuel or electricity is represented with the same energy content as a gallon of gasoline – intercity rail clocks in at 56, transit rail is next at 52 passenger-miles per GGE, then come motorcycles, airlines, and commuter rail. Cars are in sixth place (yep, even after planes) with a score of 30.

Motorcycles are very fuel efficient, and planes these days pack every seat. Transit buses were found to be less efficient than cars because they are often only 25% full, and have low fuel efficiency.

However, the role buses play in reducing congestion, and therefore indirectly reducing fuel use, should be taken into account. According to Conserve Energy Future, public transportation reduces CO2 emissions by 37 million metric tons annually and one commuter switching over from a private vehicle can reduce CO2 emissions by 20 pounds per day—more than 4,800 pounds in a year. Besides, if more people used buses, that 25% full number will only increase, making buses an increasingly strong option.

Finally, households that use public transportation save an average of $6,251 every year. Sure, cars are convenient, but economical and efficient, not so much. Given that information provided by car manufacturers may not be reliable, perhaps it is time to reconsider our transportation choices. Lots to consider.