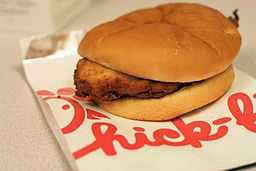 There is good news (sort of) from the fast food industry this week. After blogger Vani Hari (aka The Food Babe) wrote a post in 2011 titled “Chick-fil-A or Chemical Fil-A?” on her site, it raised concern over the quality and healthiness of the popular food outlets’ fare.

After continued posts relating to dangerous ingredients, Hari was invited to the company headquarters where she spent a day with executives discussing the food additives in question. The fact that they took her voiced concerns seriously indicated that they were concerned about the issues and sincerely wanted to do better. This we celebrate.

Hari is also one of two mothers who have petitioned Kraft, the maker of that famous mac and cheese product, to use safer, natural coloring in their products as it does in other countries where the dyes are illegal, but Kraft said no.

Recently, however, there has been a small victory in the campaign to remove the artificial yellow dye out of the company’s mac and cheese products. Kraft announced it is pulling the coloring from at least three of its boxes in the US and Canada.

Unfortunately, this positive change doesn’t affect the popular “original flavor” plain elbow-shaped mac and cheese, but it will affect new recipes that will be available in 2014, including SpongeBob SquarePants, Halloween and winter shapes, as well as two more shapes that are expected to be added.

Kraft Food Group vice president of marketing meals, Triona Schmelter said the new natural color will be made from spices like paprika. Company officials deny that the North Carolina moms who started the petition, which garnered over 348,000 signatures had anything to do with Kraft’s decision.

According to ABC News, Vani Hari, promised that she’ll “continue to keep the pressure on” the company until they make more changes.

Just this week, news has come to Hari and us all that Chick-fil-A will be removing some high-fructose corn syrup from its white buns and artificial dyes from its dressings and sauces as a first step towards improving the healthiness of its ingredients.

About 200 locations scattered throughout Georgia will be using the new and improved food items beginning in January. In addition yellow dye was also removed from its chicken soup and a new recipe will be in all restaurants by the end of December.

A major offender, noted by Hari and other health advocates, is the TBHQ found in the peanut oil that the restaurant uses. Representatives from the company have claimed that they are are now looking into a healthier peanut oil option.

Hari is concerned that although Chick-fil-A is removing some of its dangerous ingredients, it still has not addressed her main concern: a more sustainable and healthy chicken product, raised humanely without GMO feed or antibiotics.

Another major offender, still not addressed, is MSG, which has the tendency to make food addictive and has been connected to a number of health problems.

Ingredients in Chick-fil-A Chicken Sandwich
The simple fact the Chick-fil-A chicken sandwich has an astronomical number of ingredients, despite what is being taken out, should raise concerns for those in pursuit of health. See for yourself:

Just Some of the Additives

Yellow #5 aka Tartrazine aka E102: Commonly used as a coloring in many food products, such as baked goods, cereals, dessert powders, potato chips, jams, candy and pet foods, yellow #5, also known as tartrazine or E102, can also be found in certain cosmetics, shampoos and vitamin supplements. It is responsible for the bright yellow and orange shades in candy corn.

Although banned in many European countries including Austria and Norway, it is still freely used in the United States. Yellow #5 carries with its ingestion a high risk of allergic reaction—ranging from mild to serious—and is especially dangerous for those who are allergic to aspirin.

Additionally, Dr. Joel Fuhrman, a family physician, has pointed out the likely contamination by various carcinogens that can occur during its manufacturing process. This food coloring has also been linked to hyperactivity in children.

A 2008 report by the Food Standards Agency, the UK’s equivalent to the FDA, warned that certain colorings including tartrazine can cause impulsiveness, loss of concentration, hard-to-control activity, and other ADD and ADHD symptoms in children.

TBHQ (tertiary butylhydroquinone): Derived from butane, which is a very toxic gas. It is listed twice because it is present in the ingredients for the chicken filet and the bun. TBHQ is a highly toxic ingredient that has been linked to asthma, allergies, dizziness, stomach cancer and ADHD in children. Taking it out of the bun helps but it still needs to come out of the chicken.

Consumption of high-fructose corn syrup causes body-wide inflammation and obesity. In high doses it can literally punch holes in the intestinal lining allowing nasty byproducts of toxic gut bacteria into your system resulting in obesity, diabetes, cancer, heart disease, dementia and accelerated aging. In addition, high-fructose corn syrup contains contaminants, like mercury, that are not regulated by the FDA and are highly toxic.

MSG (monosodium glutamate): MSG and its use as a popular flavor enhancer started in Japan, where a Japanese doctor isolated the compound chemically from kombu seaweed. The dangers of MSG have been well researched, and reactions include heart problems, weight gain, headaches, asthma, ADD, seizures and incontinence. While some people show little reaction to consuming MSG on a regular basis, others have life-threatening symptoms.

Today, MSG can be found in numerous canned, frozen, processed and fast foods, among others. It also hides under many names and clever packaging techniques. A label that states “no MSG added” does not mean that the ingredients used to create the dish do not contain monosodium glutamate, just that no additional quantity was used in the recipe, so be sure to check your ingredient labels.

Also be on the lookout for the following additives, which always contain MSG: textured protein, autolyzed yeast, hydrolyzed protein, plant protein, oat flour and vegetable protein, sodium and calcium caseinate, and yeast extract. It is also sometimes hidden within “natural flavors”, and is naturally present in soymilk.

So, in the end, the question remains: Is it really possible to have healthy fast food, prepared for masses, able to be stored and transported, at a price people can afford? The jury is still out on this one. For the time being, be safe, eat more home-cooked meals made with fresh and wholesome ingredients and never eat anything with more than 5 ingredients or food containing things you cannot pronounce.