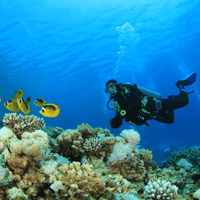 Just like humans, environmental systems can become stressed, making them more vulnerable to illness and degeneration. In an attempt to understand why coral reefs are dying at unprecedented rates, marine biologists from the Florida Institute of Technology are using mapping techniques used by human public health officials on coral reefs.

The Importance of Coral Reefs

Just like bees are a reflection of the health of the food supply, coral reefs are a reflection of the health of the world’s oceans. Coral reefs are living organisms. Not only is the coral a living creature, but the reefs are home to countless species of fish and other organisms. Coral reefs contain the most diverse ecosystem anywhere in the world, only to be rivaled by the tropical rainforest. Coral can be categorized into either hard corals or soft corals. Hard corals, such as brain coral and staghorn coral, provide the the hard structure and homes for the reef wildlife. Soft corals, such as sea fans and sea whips, help filter and improve water quality.

Coral reefs also serve as protection for coastal land formations. As storms come in from the ocean, coral reefs break up waves and prevent them from destroying fragile beaches. Economically, millions of people around the world depend on the coral reefs. Fishermen from both wealthy and poor nations around the world harvest fish from coral reefs to feed their nations. Additionally, coral reefs provide millions of dollars in eco-tourism, including diving, snorkeling and sightseeing.

Mapping is a method that is used to determine clues about the source of diseases in humans. Using mapping methods in the Carribean, scientists were able to determine that coral reefs are becoming diseased due to stress rather than infections. According to researcher Robert van Woesik, “coral diseases in the Caribbean are likely caused by stress and that stress is the warming of the seas as a result of climate change.”

Although there is controversy about the presence of climate change, there is little denying that something is increasing the temperatures of the ocean to increase. As the planet becomes more stressed, humans are also stressed in the form of reduced food sources, unhealthy air and increased weather volatility.

What do you think should happen to improve the health of our oceans?