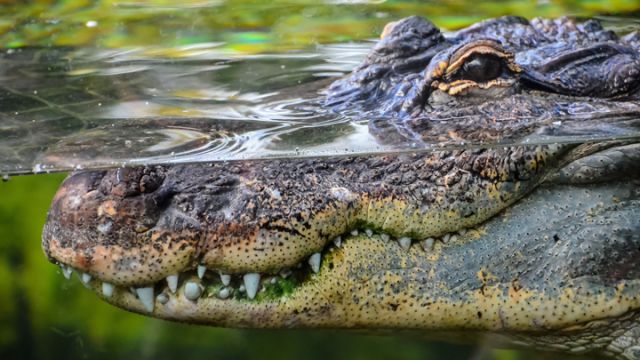 You know that whole getting-old-and-dying thing? Turns out, it might be entirely unnecessary. In fact, some lucky creatures out there don’t do it at all.

Crocodiles, for instance, don’t age. A crocodile is just as likely to die at seven years old as it is at 70. As they get older, their bodies do not get any slower or become susceptible to age-related diseases in the same way that most species do. The term scientists use to describe this in nature is negligible senescence, meaning their cells do not break down and eventually die through the process of aging. Crocodiles still die, of course, as a result of predators or lack of food, just not from old age.

One thing that older crocodiles do have working against them, however, is that they keep requiring larger and larger amounts of food to keep pace with their growth. Crocodiles never stop growing in their lifetimes, so they can get to be quite large after they hit the century mark or so.

This 100-year-old crocodile in Bangladesh was thought to be something of a god to the people in the nearby villages. Unfortunately, the crocodile died of over-feeding after his worshippers continuously threw chickens and food his way.

In industrialized countries 90 percent of people will die of an age-related illness, including cancer. Furthermore, studies have shown that 100 percent of people are aging at this very moment. In fact, every single person is now older than they were when they started reading this article. Those numbers have greatly alarmed some in the medical community. Is there something scientists can learn from crocodiles and other biologically immortal animals that may help us tackle our own aging epidemic?

We think of death as being natural to all life, but that’s not necessarily the case with some of these species.

These immortal and asexual little buggers are found almost all over the world, and they have almost no motivation to play it safe. More than any other species on the planet, the planarian flatworm can regenerate itself if harmed. Cutting one in half will cause each cut piece to completely regrow the missing part of the organism in just a few weeks. You can even cut its head in half and it will regrow the missing part of its brain. In other words, a predator could continuously feast on just half of the flatworm and have a sustainable source of food. As of yet, it does not appear that any predator has figured this out.

The immortal jellyfish has become the poster child of animals with negligible senescence. These death-defying ocean-dwellers are often found off the coast of Japan and have the ability to revert back to a pre-pubescent state after reaching sexual maturity, should they wish to go through that awkward stage over again. Basically, these jellyfish have the ability to reverse their age all the way back to the beginning of their lives. While biologically immortal, most jellyfish will succumb to predators or disease.

If you have a friend that takes forever to do something, you might consider referring to them as an Eastern box turtle. Everything this species does is done at a mind-bendingly slow pace. They are slow-travelers, have few children, take seven to 10 years to reach sexual maturity and their numbers are declining…but gradually.

They also appear to age so slowly that scientists are wondering if they do so at all. AnAge, the animal ageing and longevity database, lists the Eastern box turtle as one of the eight species on the planet that does not appear to age.

The potential for a biologically immortal human

Modern science and medicine has recently achieved significant developments in terms of our own ability to repair cell damage. Some in the scientific community feel we have crossed a threshold, which now allows us to look at the potential for stopping the aging process altogether.

The goal of BioViva is to develop anti-aging treatments through gene and cell therapies.  Scientists recently began a human experiment aimed at reducing telomere-shortening (a process that impedes cell replication and causes age-related breakdown) through gene therapy. They found patient zero in their own CEO, the ironically named Elizabeth Parrish, who reported feeling more energetic after receiving her company’s gene therapy procedures. BioViva claimed that treatments have reduced telomere shortening in Parrish by 20 years.

Strategies for Engineered Negligible Senescence (SENS) Research Foundation spends their $4 million annual budget on developing strategies to cure ageing. Developed by author and all-around interesting bearded man Aubrey De Grey, SENS feels we now have the knowledge needed to take a realistic look at curing age-related death, though many in the scientific community feels De Grey is overly optimistic on that front.

What would happen if we did cure death?

If all of a sudden the ability to live forever became available, think of the mass hysteria that would result. Every single death on the planet would then become viewed as avoidable.

There would be an almost limitless field of questions that would need to be answered:

And of course the big, possibly warfare-inducing question would be: how is access to these cell-repairing services determined?

Despite the best efforts of people like Aubrey De Grey and Elizabeth Parrish, humans are not currently biologically immortal in the way some other species are. Still,many believe the day we are able to cure aging is not that far away.

De Grey believes that the first person to live past 1,000 years is probably alive today. If that is the case, one would have to assume its probably going to be him.