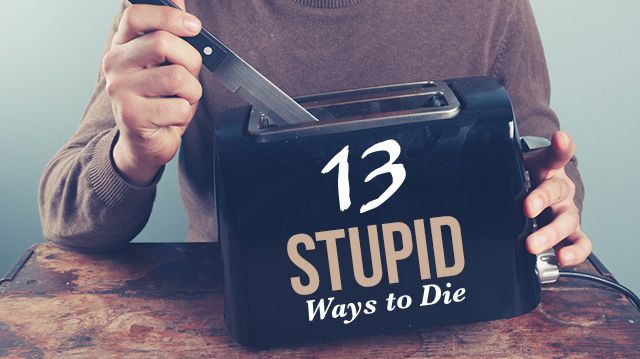 Human life is fragile. And of all the ways to die, there are some really stupid causes out there. But how do you rank the top dumbest ways to die? By the most surprising causes of death — football kills 20 people every year, apparently — or the most bizarre? Some things are hard to avoid (although rare), like being hit by lightning strike or trapped by a tsunami, but most are completely avoidable.

The Internet is full of these nutty stories, so much so that we’ve collectively created a fake award for dying in a creatively stupid way — the Darwin Awards, given in recognition of taking your dumb genes out of the pool in order to benefit the rest of humanity. So without further ado, our unscientific but surprisingly funny list of the 13 stupidest ways to die:

In 1999, the Darwin Awards nominations included a man who decided to dive off of an 80-foot cliff. While this isn’t a crazy height from which to dive, the 27-year-old was inexperienced and was knocked unconscious by the water and drowned. Another man decided to bungee jump off of a 70 foot bridge. He did his homework and found a bungee cord that was slightly shorter than 70 feet long, but didn’t take into account that bungie cords stretch or that he should account for his height.

Dancing around near molten lava

Sure a trip to the crater of a volcano is magical; it’s an once-in-a-lifetime experience. However, for some 845 people each year, hanging out with the volcano goddess Pele makes for a life-ending experience. That’s right: 845 people die from volcanoes each year. Volcanoes! It’s a bubbling, churning pot of fire coming out of the earth. It’s not like you don’t know it’s going to be dangerous when you decide to hike up the side of that fiery mountain.

Picking a fight with Elsa

Okay, not really Elsa, the Disney character from “Frozen” who can build ice castle with the flick of a dainty wrist, but falling icicles nevertheless claim the lives of 100 people each year in Russia alone. That’s terrifying, but it makes sense. They’re basically tiny spikes dangling over doorways and off roofs, just waiting to fall on passersby.

Thinking you rule the animal kingdom

Some animals are dangerous — lions, tigers and bears, oh my! — but others seem benign enough to be harmless. Not so, people! While sharks only killed five people in 2016, hippos kill 2,900 people every single year. Deer kill 130 people annually (traffic crashes), and in the United States 30 of us will die from dog attacks this year. Dogs sound dangerous, but even ants kill 30 people each year — my “African Queen” nightmare made reality — and jellyfish claim 40 lives annually.

No one wants to get stuck waiting for a train but last year there were more than 2,000 collisions involving trains and cars across the nation. In those collisions, 119 people were killed. Some trains are incredibly fast moving. Even when you find yourself stopped at a crossing with no train in sight, a moment’s impatience could spell disaster.

Obesity kills around 30,000 people each year, but did you know that tipped over vending machines kill 13 people annually? That’s right: those Cheetos could kill you now or later. Whether you decide to try and shake them out of the machine is up to you.

Inspecting your eyeliner in your rearview mirror when you should be driving. Trying to handle a burger and fries at the wheel. According to Distraction.gov, more than 3,000 people were killed in 2011 as a result of car accidents involving a distracted driver. Doing anything other than just driving means your priorities might be askew, and dangerously so.

Shopping on Black Friday may lead to you wanted to kill someone, but maybe this year you’ll rethink that urge and not even go. Around 550 people really are killed during Black Friday shopping. Dead forever over a $100 TV flat-screen TV. Not cool.

A bit too frisky

When it comes down to getting busy, you might want to exercise some restraint. Getting “creative” in the bedroom can be dangerous. One woman was killed by homemade nipple clamps wired to a power strip, while others have died from having sex in a car. In their garage. With the door closed and the motor on. Autoerotic asphyxiation kills 600 people each year. It should be noted that 450 people in the United States die each year just from falling out of bed. At least some of them had The Kamasutra propped open on a pillow at the time.

Thinking you can drive through that puddle

That’s right: More than half of the flood-related drownings that happen each year — around 200 in total — happen because people think they can drive through flood water. Of all the major weather catastrophes we may experience in our lives, floods claim more lives than any of the others.

Around 17 people in France die from baguettes each year and around 70 children are killed each year by eating hot dogs. I’m not sure if the most unsettling part of this information is the fact that there are probably more people dying from baguettes each year — note that the stat is for France alone — or that parents are still feeding their kids whole hot dogs. I mean, if you’re going to feed your kids processed meat, at least cut it up.

Thankfully, lightning only kills about 10 percent of the people it strikes. According to the National Oceanic and Atmospheric Administration (NOAA), 33 people were killed and 234 people were injured by lightning strikes each year from the years of 2004 to 2013. Flying a kite during a thunderstorm would increase the chance of getting hit. Heading inside during a thunderstorm is definitely a better idea.

We’ve already hit distracted driving, but it bears repeating. More than 3,000 teens die each year from texting while driving. Nearly 25 percent of all car accidents are caused by it. Be honest with yourself: Do you text while driving? If so, stop. The fact that we’re still having the “texting while driving is bad” conversation makes this reason for dying perhaps the dumbest of them all. For the sake of your life, put the phone down and drive.

When it comes to preventing a stupid death, common sense is usually the best way to mitigate disaster. And you probably shouldn’t make a habit of saying things like, “Hold my beer and watch this,” while you’re at it. Be safe out there.