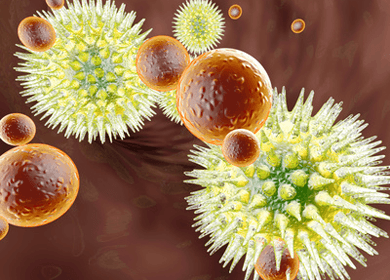 The human digestive system is a delicate and complex environment. Within this network, gut bacteria and gut viruses interact and determine the functionality of our bodies.

Some of these bacteria and viruses are friendly, and some are unfriendly. The key to digestive health is to increase the good, and minimize the bad.

A new study on antibiotic resistance performed at the Wyss Institute for Biologically Inspired Engineering sheds light on the ways in which gut bacteria and gut viruses, known as bacteriophage, or phage, work together. However, the results of this study may have serious implications for our digestive health.

What’s more, the genes which the gut viruses provide the bacteria help them to become resistant to multiple types of antibiotics at once, not just the ones they have been exposed to.

Collins and his team gave lab mice two commonly prescribed antibiotics, ciprofloxacin and ampicillin. After eight weeks, they harvested feces from the mice and analyzed the viral genes, as well as the bacterial drug-resistant genes.

The researchers found notably higher numbers of antibiotic resistant genes in the mice than would have normally occurred, and the bacteria was found to be resistant to related antibiotic types as well.

The scary thing about the results of this study is that the researchers are now looking at developing drugs to destroy the phage that help gut bacteria, to prevent the bacteria from becoming antibiotic resistant.

Wyss Institute Founding Director Don Ingber, M.D., Ph.D. says, “antibiotic resistance is as pressing a global health problem as they come… Jim’s novel findings offer a previously unknown way to approach this problem – by targeting the phage that live in our intestine, rather than the pathogens themselves.”

While antibiotic resistance is indeed a problem, it is one that we caused ourselves, by over-prescribing antibiotics, and by feeding antibiotics to the animals that we use for our meat supply, to name only two ways.

Gut viruses are often beneficial to the body, and to tamper with them threatens to severely disrupt the delicate balance within our guts.

Researchers at Washington University School of Medicine recently examined gut viruses by analyzing a wide variety of stool samples. They found that the viral communities in the gut are entirely unique to each human being, even in the case of twins.

Bacterial communities are often similar, but the viruses are unique. Every individual has a unique balance of the two to keep his or her body running optimally.

Many of us today are familiar with the role of friendly bacteria, or probiotics. Gut viruses can be friendly, as well. Along with supporting friendly bacteria, they help us to digest certain nutrients that our bodies cannot digest without them, such as plant-based carbohydrates. Killing these viruses is a very dangerous proposition.

Instead of destroying our friendly gut bacteria and disrupting the chemistry of our digestive systems in order to make antibiotics work better, we need to address the problem at the core. Stopping the over-prescription of antibiotics for minor illnesses that the body can handle on its own would be one huge step.

Also, if we focus on eating healthy diets to maximize friendly bacteria, and eliminate processed foods which support unfriendly bacteria, our bodies would be even better equipped to deal with many illnesses on their own; our immune systems would become stronger.

While necessary in extreme cases, antibiotics are often not necessary, and attacking our healthy phage in order to decrease antibiotic resistance is absurd. We created the ‘superbug’ problem, and if we go back to natural diets and lifestyle habits, we can start to undo the damage we have done.