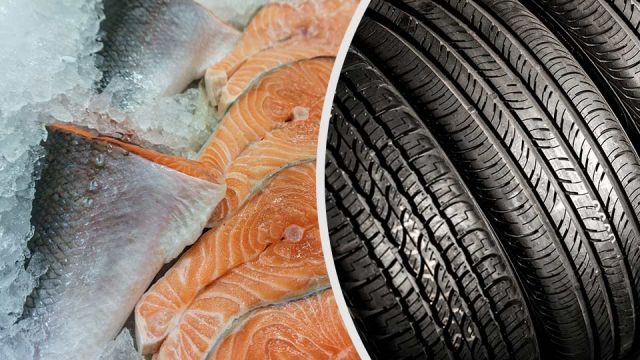 Salmon is known to be one of the sea’s most nutrient dense foods (and it doesn’t hurt that it’s so dang tasty). Rich in omega-3 fatty acids, protein and B-vitamins, this versatile fish has been shown to promote whole body wellness. From joint health to cancer prevention, the benefits are vast. However, there’s a dark side to salmon — one that may expose you to toxic chemicals.

How the heck does a tire chemical relate to my salmon?

You may have heard some of the controversy surrounding farmed salmon, and unfortunately, a lot of what you hear is true. In today’s modern world, millions of Americans are eating farm-raised salmon on a regular basis. While these people believe they’re doing their family a health-boosting favor, they are actually being exposed to harmful toxins.

Throw in issues surrounding imported fish (which is the case for approximately 80 percent of the fish Americans eat), and for each mouthful of farmed salmon you eat, you’ll be chomping on everything from pesticides to dioxins. Just to clear that seven-letter word up, dioxins are industrial byproducts.

Not exactly the “seasoning” you want on your next filet, eh?

And, it gets worse. Based on toxicology tests, it’s been found that farmed salmon is actually one of the most toxic foods in the world. In fact, when compared to wild salmon, farm-raised salmon contains PCB levels that are eight times higher.

Although there’s a list of toxic contaminants that are causing concern, one chemical is particularly harmful. Known as ethoxyquin, this rubber stabilizer was developed by…

… you guessed it, Monsanto!

Based on the toxicity of ethoxyquin, the EU set limits regarding its use in the production of fruits, vegetables, nuts, and meat. However, since this food additive was never intended for use in fish. In turn, this has resulted in the unregulated use of ethoxyquin. This means that there are currently no limits in regards to how much of this chemical can be used in seafood production.

This has led to increasing concerns surrounding the following four dangers.

Unfortunately, ethoxyquin has been shown to cause DNA damage in humans. In one important study, researchers were interested in the adverse effects of this chemical in people. After treating cells with ethoxyquin doses for one hour (ranging from one to 250 microM), they found that human lymphocytes were damaged in a dose-dependent manner.

2. Can pass through the blood-brain barrier

The blood-brain barrier is a membrane that regulates the movement of molecules, ions, and cells between the brain and the blood. In turn, it helps protect the brain from foreign, potentially harmful substances. However, Victoria Bohne and her colleagues have shown that this chemical can cross this barrier. This is concerning as ethoxyquin is possibly carcinogenic.

3. It accumulates in fatty tissue

Detected in breast milk and in the fatty tissue of humans, experts agree that this toxin may accumulate in our body. This study found that when feeding mice varying levels of ethoxyquin for 14 weeks, residue levels were found in the liver and brain. Those in the higher feeding group (0.5 percent of the powdered feed) showcased levels that were twofold when compared to the control group.

4. May increase risk of cancer

As stated above, it is believed that this chemical is carcinogenic. In the 1980s, dog breeders were concerned that dangerous additives were threatening the well-being of their animals. Not only was ethoxyquin believed to cause reproductive issues and autoimmune disorders, but this chemical was also believed to increase the risk of cancers in both dogs and cats.

Although less is known about cancer risk in humans, this is an issue in itself. We simply do not have enough data to justify using these types of additives within our food supply.

These dangers are just the tip of the iceberg in regards to farmed-fish — both in terms of the environment and human health. From the food they are feed to the crowded conditions that they live in, farmed farm exposes humans to toxins while threatening wild ecosystems.

It is recommended that you consume only authentic wild-caught Alaskan sockeye salmon. Another option is consuming smaller fish with a shorter life cycle (reducing the health effects of bioaccumulation). Both sardines and anchovies are both ideal choices.

It is time that we reconnect with our food. Don’t be shy to ask questions about where your food is coming from and how it was produced. On that note, I want to leave you with a startling fact in the hopes that you will rethink your current food choices.

As stated by PETA, nearly 40 percent of farmed fish die before aquafarm operators are ready to slaughter them. Those who survive are then starved for up to 10 days before they’re sent to slaughter.

Now, are you ready to start asking questions?