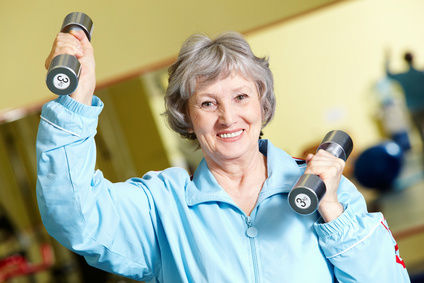 Some people associate growing older with growing more sedentary, but it by no means has to be this way. In fact, a great deal of research has found that exercise for older individuals can improve cognitive function, reduce the number of falls, increase strength, and significantly contribute to slowing the overall aging process.

Professor Maria Fiatarone Singh of the University of Sydney School of Medicine has performed numerous studies testing the benefits of exercise on elderly individuals. She says, “if I had to do only one thing for the frail older person, it would clearly be weightlifting exercises, and not any other form of exercise.”

Strength training is especially important for senior citizens because of the onset of sarcopenia, the age-related decline in strength and muscle mass. According to the National Institute on Aging, sarcopenia can lead to many health issues, including obesity, falls, lower mobility, osteoporosis and lower tolerance for temperature shifts. According to Singh and many other experts, strength training has the potential to slow and even reverse many of the effects of sarcopenia.

Aside from crucial strength exercises, aerobic exercise also has its anti-aging benefits. A study performed at the University of Texas in Dallas found that this form of exercise helped older individuals improve cognitive function, including memory. Researchers studied 37 adults between the ages of 57 and 75, all of whom had sedentary lifestyles.

The individuals were split into a control group and a test group. The test group exercised on a stationary bike or treadmill for one hour a day, three days a week, for 12 weeks, while the control group did not.

Results showed that those individuals in the group that exercised had higher blood flow through their brains, as well as better memory, throughout the entire 12 weeks than those in the control group.

The lead author of this study, Sandra Bond Chapman, said, “science has shown that aging decreases mental efficiency and memory decline is the number one cognitive complaint of older adults.

This research shows the tremendous benefit of aerobic exercise on a person’s memory and demonstrates that aerobic exercise can reduce both the biological and cognitive consequences of aging.”

According to statistics compiled by the National Institute on Aging, less than 15 percent of adults over 65 perform strength training on a regular basis, and only 11 percent of adults ages 85 and over do any kind of regular exercise at all. Looking at the multitude of research on the subject, if more older people performed regular exercise, they may experience a dramatically improved quality of life.

Exercise is very important to optimal health at any age, and it’s never too late to start!