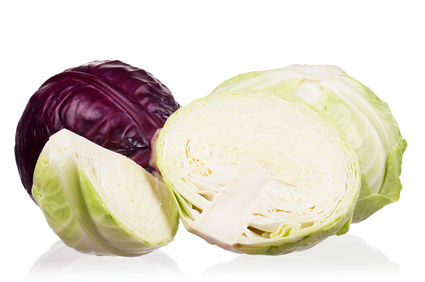 Known to be one of the healthiest foods around, cabbage is a member of the cruciferous vegetable family alongside both broccoli and cauliflower. While there are several varieties of cabbage, most people classify them as either green or red.

Both green and red cabbages are jam-packed with a boatload of nutritional benefits, and incorporating a few servings a week may help prevent cancer, diabetes, heart disease and other chronic conditions and illnesses. While both the red and green varieties are highly nutritious and boast high concentrations of vitamins and minerals, there are a few differences between the two hues.

Many people are most familiar with green cabbage. Despite its mild shade, green cabbage packs a mighty nutritional punch. This variety has the upper hand when it comes to vitamin K, an important nutrient in bone health.

Vitamin K helps regulate the mineralization of bone production. Individuals lacking adequate amounts can be at risk for osteoporosis later in life, and may be more likely to suffer from fractures.

It also plays a major role in blood-clotting; without vitamin K the body would not be able to recover from even minor scrapes. A one-cup serving of green cabbage will supply 57 percent of the recommended daily amount of vitamin K.

Like most leafy greens, the green variety of cabbage is also a great detoxifying agent. Green cabbage contains indole-3-carbonile, a powerful antioxidant that not only helps cleanse the liver, but also promotes skin health, as it removes toxicities that accumulate in the blood and often lead to blemished skin.

Red cabbage contains about ten times the amount of vitamin A of its green cousin. This powerful antioxidant plays a key role in eye health and can help prevent early stage age-related macular degeneration from progressing to the later stages of the disease.

A one-cup serving of red cabbage will supply 33 percent of the recommended daily intake of vitamin A, as compared to only 3 percent provided from the same amount of the green variety.

Red cabbage trumps green when it comes to iron content, providing twice the amount. Iron is vital for proper immune function, as well as to providing muscles with oxygen during exercise. Iron also plays an important role in maintaining the proper function and formation of red blood cells.

One component of red cabbage that you won’t find in the green variety is a high concentration of anthocyanins, a type of flavonoid phytonutrient. In fact, it has been found that red cabbage contains over 36 different anthocyanins. These potent antioxidants give red cabbage its signature hue, and aid in both cancer prevention and improved memory.

While one variety isn’t necessarily better than the other, incorporating a mix of both red and green cabbage will ensure you get a variety of nutrients. Cooking cabbage depletes some of its nutritional value, so look to add organic, raw shredded cabbage to salads and slaws, or saute lightly to maintain the most nutritional value.