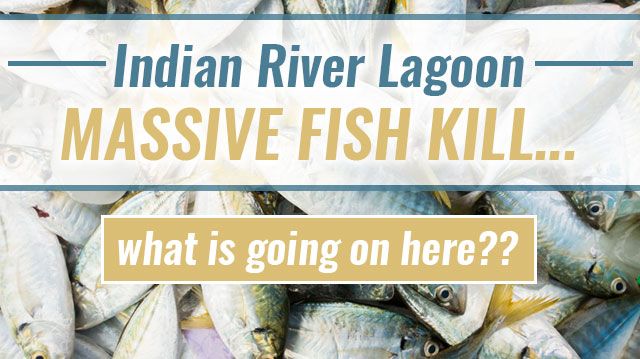 Since March 23, dead fish have filled the waters of Florida’s Indian River Lagoon from Melbourne to Titusville. Volunteers are scooping up the carcasses and depositing them in dumpsters provided by Brevard County. From there, the fish will head to landfills.

The St. John’s River Water Management District (SJRWMD) is employing nets to gather the dead fish near Thousand Islands sector in Cocoa Beach. Tourists embarking on cruise ships in the region are greeted by enormous numbers of dead, stinking fish.

Forty years ago, before massive development, the waters of the Indian River system were clean, and the seagrass thrived. For sport fishermen, it was one of the best places in North America for sea trout and other species. Now, as rotting carcasses create an unbearable stench, it is possible that this horrendous fish kill is only a portent of things to come.

The Indian River Lagoon ranges across 40 percent of the state’s east coast, and is considered an estuary of national significance. It consists of the Indian River, Banana River and Mosquito Lagoon. The area affected by the fish kill stretches for 30 miles.

The SJRWMD reports that seagrass beds have declined because of an algae superbloom since 2011. Seagrass beds declined by 60 percent from the previous year. “Seagrass is the lifeblood of the lagoon, serving as a nursery for juvenile fish, habitat for shrimp and a food staple for manatees,” according to the SJRWMD. Early 2013 brought reports of pelican and manatee deaths, possibly related to the algae superbloom.

In this El Niño year, Florida was especially hard hit. Winter is generally the dry season in the Sunshine State, but much of Florida saw three times the normal amount of rainfall in January. This resulted in extensive fertilizer runoff from urban areas heading into estuaries. Warmer than normal winter temperatures aided a brown tide and algae bloom in removing oxygen from the water.

The worst in decades

While fish kills occur regularly, an incident on this scale is extremely rare. Lifelong residents are calling it the worst they’ve ever seen. There’s no tidal flow on large parts of the river and neighboring canals because of the sheer number of fish carcasses. The video below shows the grim reality of this tragedy.

Captain Alex Gorichky, a fishing tour operator and conservationist, told the New Times Broward-Palm Beach that it was the worst such fish kill in “decades,” with every species — approximately 30 — in the lagoon affected. He described the water as “radioactive Yoo-Hoo green.”

Politicians and voters to blame

Environmentalists blame government apathy regarding the overall ecosystem fragility as a cause of the fish kill. The Huffington Post points out that Florida politicians have voted no on:

In 2013, the EPA proposed an upgrade on septic system and sewage treatment plant upgrades, along with stormwater management improvements. The goal was to seriously reduce the nitrogen and phosphorus pollution emanating from fertilizers on lawns and golf courses, sewage and other sources. Depending on the municipality, the proposal was estimated to cost each state household between 44 and 108 dollars annually. The EPA received a letter from 58 organizations involving every major Florida industry stating their opposition to the proposal. The letter cited “burdensome costs” and alleged the actions would not improve the environment. Ed Killer, the fishing columnist for the TCPalm newspaper, writes, “I’m sick of the status quo those special interest groups ensure that pollutes, diverts, abuses, misuses and exploits what once were pristine waters.”

At the end of the day, it’s really the Florida voter — or resident who doesn’t bother to vote — who is to blame. They keep returning corrupt, anti-environment politicians to office. Until voters bother to do their research and cast educated ballots, it’s likely more fish kills and environmental disasters will continue in Florida.