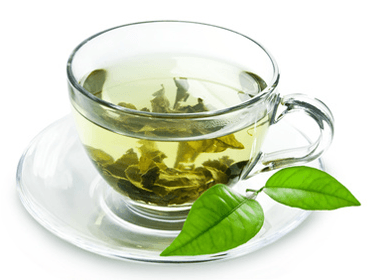 Sipping a cup of green tea, whether hot, cold, or in a bottled beverage, is becoming an increasingly popular past-time for Americans—intake has more than doubled in the past four years.

Today, you can find green tea in everything from shampoo and face creams to muffins and ice cream. Popular in Asia, this plant-based beverage has a lot to offer: a bold, exotic flavor profile, a light nutritional profile with zero calories, and an increasing body of research demonstrating potential health benefits.

Reading the tea leaves. Green tea, like black and oolong tea, is made from the leaves of the Camellia sinensis plant. What makes green tea unique is that the mature tea leaves are steamed, rolled, and dried directly after picking without allowing for oxidation, producing a tea that tastes closest to the fresh leaves. In contrast, black and oolong tea are oxidized, which turns the leaves brown and produces its strong flavor.

Scientists have identified high levels of compounds in brewed teas called catechin flavonoids, which possess anti-inflammatory, antioxidant and anticarcinogenic effects. Green tea, in particular, contains the catechin epigallocatechin gallate (EGCG), which may be at the root of green tea health benefits.

Brewing green tea science. A number of health bonuses, from strong teeth to bone protection, have been attributed to green tea. Here’s a look at some of the most intriguing areas in science.

Studies show that green tea may inhibit the development and formation of cancer in animals; it’s been linked with protection in many sites, such as skin, lung, mouth, stomach, colon, pancreas, bladder, and prostate. However, human studies have shown inconsistent findings, and the doses in green tea studies have varied. A 2012 Japanese study found that 10 cups per day was a significant factor in primary cancer prevention for the general population.

Tea drinkers seem to have a lower risk of heart disease; for every three cups of tea consumed each day, the risk of heart attack drops by 11 percent, according to a meta-analysis in the American Journal of Epidemiology. Up to 10 cups of green tea daily have been found to lower cholesterol, “bad” LDL cholesterol, and triglyerides, and raise “good” HDL cholesterol. Not all studies have found such positive effects.

Much attention has focused on green tea’s “fat-burning” power. Researchers from the Netherlands reported in a 2010 International Journal of Obesity that green tea may increase energy expenditure by four to five percent and fat oxidation by 10 – 16 percent. Yet, the science is inconsistent in this area.

Look to the future

We need more research on the health benefits of green tea before we can understand its full health potential; fortunately, several human trials are underway. In the mean time, there doesn’t seem to be a downside for sipping green tea, unless you are sensitive to its caffeine content—green tea contains 9 – 50 milligrams per cup, compared with coffee’s 72 – 130.

I recently tried a sample of SereniTea, convenient little pouches of organic green tea extract. During the hot LA summer, I made jugs of iced tea by simply ripping open a few pouches, adding them to water, and floating some lemons and limes from my citrus tree in the pitcher. Served over ice, the beverage was cool and refreshing. Sure, you can make iced green tea the old-fashioned way, by brewing green tea leaves (I learned to do this in Japan!) and pouring it over ice, but sometimes it’s convenient to rely on products that make your life easier.

As a registered dietitian with 16 years of health care experience, she focuses on writing features covering health, wellness, nutrition, cooking, wine, restaurant reviews, and entertainment. Over 750 of Sharon’s features have been published in a variety of publications. Her recent book The Plant-Powered Diet: The Lifelong Eating Plan for Achieving Optimal Health, Beginning Today can be ordered here.