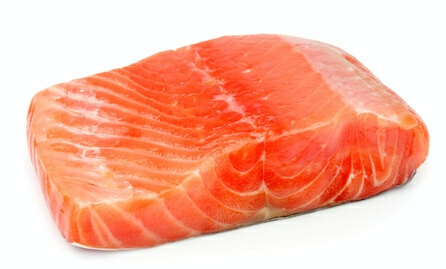 If approved, AquaBounty’s GMO salmon would be the first genetically engineered animal to be sold for human consumption and could appear in restaurants and supermarkets as early 2013.

A Purdue University study showed that if 60 transgenic fish bred in a population of 60,000 wild fish, the wild fish would be extinct in 40 generations.

“We’ve seen assurances in the past from industry and regulators that there won’t be catastrophic consequences like the Gulf oil spill,” said George Kimbrell, a senior staff attorney for the Center for Food Safety. “We have a cultural amnesia about these things.”

No one gets excited at a genetically raised fish. Why put a different genetic makeup into your body? Some scientists don’t see it this way.

AquaBounty, calls its super salmon an “advanced hybrid” rather than a transgenic fish, said the fish are safe to eat and would be raised in contained farming operations that could be based inland rather than along coastal waters. And the modified fish, all females, would be sterile so that they couldn’t breed with wild fish if any escaped, the company said.

AquaBounty’s fish grow faster but not bigger than normal Atlantic salmon. The company says that genetically modified salmon are identical to regular salmon in every way except for the genes that have been added.

The difference between males and females is the Y chromosome. The company has added a growth hormone gene from the chinook salmon as well as a gene from the ocean pout, a distant relative of the salmon, to a normal Atlantic salmon’s roughly 40,000 genes. Salmon normally feed only during the spring and summer, but when the on-switch from the pout’s gene is triggered, they eat year round.

We have another oil-rig-like catastrophe waiting to happen in our oceans.
The result is a transgenic salmon that grows to market size in about half the time as a normal salmon – 16 to 18 months, rather than three years.

The FDA doesn’t comment on pending applications, though a public hearing on the AquaBounty application could come as early as this fall. Such public hearings can signal the FDA is close to a decision.

How many times has the FDA’s decisions affected the lives of millions of people?
There have been no independent, long-term scientific studies of AquaBounty’s patented salmon. The human health impacts of GMO salmon are not known. The FDA has relied on scant scientific documents provided by AquaBounty itself. In fact, some of the FDA’s own assessment of AquaBounty’s studies to determine whether GMO salmon are safe for human consumption states that the studies contain “technical flaws” and provide “insufficient data”.

For two of the studies submitted, AquaBounty used sample sizes so small that they have no scientific credibility, with only 12 fish tested for one study, while another study on possible allergic reactions in humans involved only 6 fish.

Still, the FDA is currently on the verge of approving the company’s GMO salmon.
What will happen to people who eat the engineered fish over time? How far can genetically manipulated traits impact human health?

Once approved, AquaBounty said it could start marketing the eggs from transgenic salmon within two or three years. The company also is reportedly developing transgenic tilapia and trout. Ask for it in your favorite restaurant.

Once again, unknowing humans will be tested and the product in question will be recalled after many ill-effects on humans. But in this case genetically modified organisms can’t be recalled from the wild.