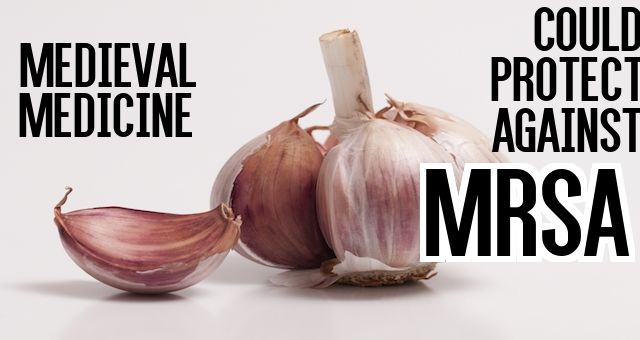 In this era of fears about overprescription of antibiotic medications and the rise of drug-resistant superbugs, who would have thought that we need to look back into history to find a cure.

A recent discovery by scientists at the University of Nottingham, U.K., has left us natural health folk with a little bit of a smug look on our faces, as scientists have found that a natural remedy recorded over 1000 years ago is able to wipe out modern-day superbugs.

The ancient medicine was discovered in a ninth century Anglo-Saxon manuscript called Bald’s Leechbook, a sort of primitive medical textbook. The recipe for “eye salve” calls for garlic, onion or leeks, wine, and cow bile.

According to the text, it seems these pioneering ninth century researchers were already practicing something akin to the modern scientific method. They had precise measurements and methods, to which they applied observation, experimentation and detailed record-keeping.

This particular recipe involves equal amounts of garlic and onion or leek — these are finely chopped and then mashed in a mortar and pestle for two minutes. The mixture is added to distilled water, along with 25 milliliters of wine and an unspecified quantity of bovine bile salts, and is kept chilled for nine days.

The Nottingham University microbiology researchers tested each individual ingredient against colonies of methicillin resistant Staphylococcus aureus (MRSA). They also tested the entire remedy, as instructed in the Leechbook, and a control solution. The lead researcher, Dr. Freya Harrison, stated she expected the recipe to have “a small amount of antibiotic activity,” but was “absolutely blown away” when the combined recipe was able to kill up to 90 percent of the MRSA bacteria.

Dr. Christina Lee, an Anglo-Saxon history expert from the same university noted there are a number of other medieval texts that detail other seemingly antibacterial remedies. This suggests that the healers of the Dark Ages were experimenting with holistic antibiotics before they even knew what bacteria were, or understood the root cause of disease.

Perhaps these forgotten dusty tomes will be called upon once again for solutions to the modern-day superbug problem.

So how did we get into this mess, where, in recent years, more people have died from MRSA in the United States than from AIDS. The process started in the 1940s, when penicillin was first used in hospitals. At this time, resistant strains of bacteria were unknown, but by the 1950s, they started to show up.

Enter methicillin, a new type of antibiotic introduced in 1961 to combat the resistant strains. This time, the bacteria were able to develop resistance within one year. Since the 60s, staphylococcus bacteria have cleverly steamrollered each type of antibiotic that humans have thrown at it.

Essentially, as scientists steadily introduce novel types of antibiotic drugs, staph bacteria are able to evolve and mutate in response. They develop more complex traits to survive the attack of the drugs. Their short generation times and large population sizes allow bacteria to evolve much more rapidly than larger organisms such as ourselves. Bacteria also employ a strategic ability which we don’t have — they can actively pass advantageous genes to each other in a process called horizontal transfer.

Sir Alexander Fleming, the scientist who first discovered penicillin in 1928, cautioned against antibiotic resistance in his Nobel prize speech. Now we are seeing his predictions become reality. One case of MRSA was observed to go through 35 different stages of mutation within the patient during treatment with vancomycin, an antibiotic that was at one point considered the last frontier against MRSA. Over the course of a few months, the bacteria were able to evolve vancomycin resistance within this poor patient.

In a nutshell, bacteria are incredibly dynamic and adaptive organisms, which seem to easily evade any pharmaceutical intervention we can come up with. Perhaps it’s time to go back to basics, rather than continuing the failing battle of outsmarting MRSA.

The power of garlic

Garlic has clearly been recognized as a potent natural medicine for many centuries. Along with other plants in the allium family, such as onions and leeks, garlic has strong activity against fungal, viral and bacterial infections.

Garlic even prevents the production of toxins, which normally worsen the symptoms of a bacterial infection. Garlic has also been found effective against various strains of pneumonia and the common intestinal bacteria H. pylori. In addition, garlic is useful for halting the growth of cancerous cells, the maintenance of healthy cholesterol levels, assisting the stomach in good digestion, and can ward off pre-eclampsia, a dangerous condition in pregnancy.

The main active ingredient in garlic is called allicin. The allicin content can be multiplied several times over by cutting or crushing the garlic, and letting it sit for several minutes. Garlic should be added to food raw, as its medicinal effect is largely lost when it is cooked or dried. Integrative medicine expert Dr. Andrew Weil advises that commercial garlic capsules do not preserve the full activity of the fresh garlic bulb.

Other natural treatments for MRSA

– Oregano: Oil of oregano has become popular recently, and for good reason. It is antiseptic, antioxidant, antifungal, antiviral, antiparasitic, and anti-inflammatory. This amazing gamut of abilities has made oregano oil the new poster child for treating superbugs. Recent studies have demonstrated that it may be as effective as many antibiotics in treating E. coli, salmonella, MRSA, and flesh-eating bacteria.
– Colloidal silver: This ancient remedy involves submicroscopic silver particles suspended in a base liquid. Although it has been shown to boost the effect of antibiotics, there are risks involved with long-term use.
– Herbal extracts: Olive leaf extract, tea tree oil, and grapefruit seed extract are strong therapeutic agents that have been demonstrated as effective against antibiotic-resistant bacteria.
– Manuka honey: This amazing honey from Australia and New Zealand kills proteins in bacterial cell walls and has been successfully used against MRSA.

Scientists continue to work against MRSA 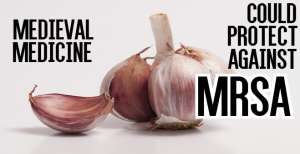 An early 2015 study reported in the journal Nature described researchers at Northeastern University in Boston who have created a novel method of growing soil-based microbes in a semi-controlled environment. This represents an interesting hybrid approach of harnessing natural bacteria, which may have similar adaptive mechanisms to MRSA.

One of these newly discovered antibiotics is called teixobactin. It was able to wipe out a deadly dose of MRSA in mouse-based trials, and now needs to be tested on humans. The researchers believe teixobactin may use a novel mechanism, targeting fats that are needed to build the bacterial cell wall. The hope is that superbugs would be unable to develop resistance to this new mechanism.

This potentially marks the first major achievement in antimicrobial medicine since 1987. Scientists have been unable to make any significant advancements in antibiotics since that time, and experts have began calling this a global health crisis on the brink of something like the “dark ages of medicine.” Chief Medical Officer for England, Professor Dame Sally Davies has stated that antibiotic resistance should be treated as a “ticking time bomb” akin to the threat of terrorism.

It will remain to be seen whether we will come out on top, either via biotechnological solutions, or by reverting to ancient natural remedies, or perhaps a combination of both.

Other medieval remedies we are glad have fallen out of favor…

While Bald’s eye salve may offer a viable solution to our modern medical crisis, there are other medieval treatments and procedures we should be very thankful to have left behind.
– Human fat: This was often sold by public executioners and applied to wounds and sores, or used as part of an ointment for gout and rheumatism.
– Excrement: In the seventeenth century, Robert Boyle (hailed as the father of chemistry) used dried and powdered human poop for cataracts. The powder was blown in the eye. Pulverized infant feces was also used for epilepsy.
– Mummy dust: After the discovery of Egyptian tombs, it became a popular belief that the dust from mummies was a valuable medicine. Unfortunately opportunistic traders began creating substitutes made from recently dead lepers, beggars or animals.
– Bleeding: Medieval physicians were very fond of drawing out the “diseased blood” using methods such as small cuts or the application of leeches. This practice continued until recent centuries, and likely only made the patient weaker.

We certainly suggest consuming whole medicinal foods such as onion, garlic and herbs to support a robust immune system. However, regarding some of the more questionable medieval remedies, it goes without saying, don’t try these at home!